Armed Protesters Begin To Arrive At State Capitols Around The Nation

Armed protesters have arrived at multiple state capitol complexes across the country Sunday morning. This follows a special bulletin from the FBI last week that warned: “armed protests” were being planned at 50 state capitols and the US Capitol in Washington, DC, ahead of President-elect Joe Biden’s inauguration on Jan. 20. 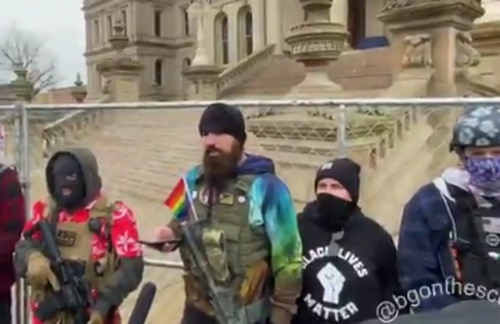 While the protesters are being identified across various platforms as members of a so-called “boogaloo” movement, they largely appear to be generic anti-government anarchists – some of whom call themselves “liberty boys,” and others who oppose the conservative Proud Boys. Their sudden emergence surrounding the inauguration is curious to say the least. 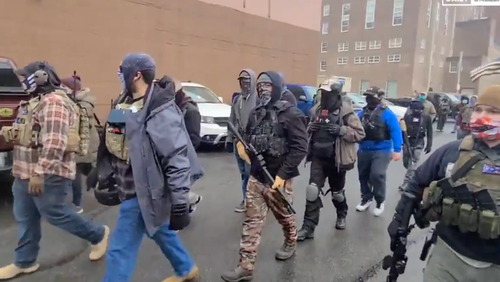 A field reporter at The Daily Caller, Jorge Ventura, reports from the Ohio Statehouse, where he notes that “580 National Guard members” were activated “to provide security around the Ohio Statehouse in downtown Columbus through Wednesday.”

“We are not a pro-Trump group,” said one of the armed protesters at the Ohio demonstration.

“We are not a pro-Trump group” says one of the speakers for the Boogaloo Boys in front of the Ohio Statehouse pic.twitter.com/mHTMfSlLtk

“We are out here supporting the local BLM scene” says one of the Boogaloo Boys before marching towards the Ohio Statehouse building to protest pic.twitter.com/i7KQ3HohqD

An armed protester in Ohio told the “Proud Boys do not come here.”

“We hope the Proud Boys do not come here, we do not want you here,” armed boogaloo boys protesting outside Ohio Statehouse. Ohio State Highway Patrol and National Guard surround the area pic.twitter.com/99MEtOac3l

In Michigan, a dozen or so armed protesters are now showing up at the State Capitol.

About a dozen people who appear to be boogaloo boys accompanied by a fair number of media members walk to the front of the Capitol pic.twitter.com/rUjWvP6F3C

“If you continue to oppress the American people, they will remain rational no longer.” A member of the Boogaloo Bois gives remarks outside the fenced-off Capitol steps #Lansing #Michigan #Capitol pic.twitter.com/Jo9Xxdhpdx

Daily Mirror’s Derek Momodu tweeted, “this is very worrying…” as armed protesters gather in front of the Michigan State Capitol as Guardsmen are on “standby.” 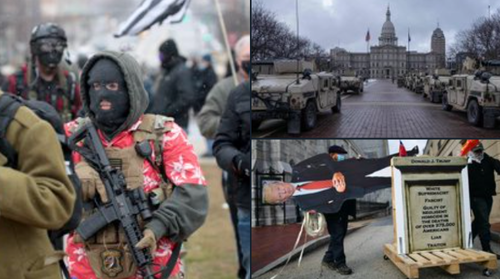 “If you continue to oppress the American people, they will remain rational no longer,” said an armed protester in Michigan.

“If you continue to oppress the American people, they will remain rational no longer.” A member of the Boogaloo Bois gives remarks outside the fenced-off Capitol steps #Lansing #Michigan #Capitol pic.twitter.com/Jo9Xxdhpdx

In New Hampshire, a handful of armed protesters showed up outside the Capitol. 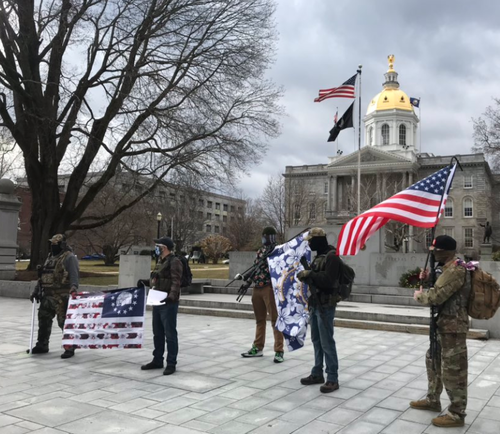 While a similarly small group began to assemble outside the Oregon Capitol. 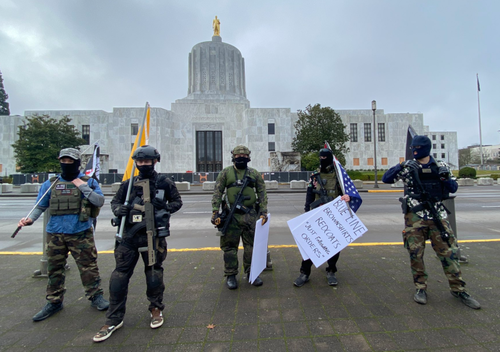 The group in Oregon refers to themselves as the “liberty boys.”

At the Illinois State Capitol, Guardsmen and State Troopers are heavily armed, waiting for protesters.

A heavily armed platoon of Illinois National Guard formed a perimeter to blockade all access roads leading up to the Illinois State Capitol. pic.twitter.com/VSRJ169B11

There’s a large police presence at the Minnesota State Capitol building as threats of armed protesters could assemble today.

Meanwhile, in Washington, DC, at least 25,000 Guardsmen and other law enforcement agencies have the US Capitol to White House area on lockdown.

On top of this all, civil flight observers have said, “amount of USAF cargo aircraft (C130s C17s KC135s KC46s) bringing National Guard troops to Washington DC/Capitol is truly impressive. Almost a constant air bridge for the past several days.”

*Check back for more updates.