On Friday morning, someone stole an armored military Humvee from a National Guard facility in Los Angeles, California.

The bureau is offering a $10k reward for information leading to the recovery of the Humvee, the FBI tweeted Saturday.

A couple of pictures of the missing Humvee were also attached to the tweet. The vehicle is decked out in “green camouflage,” and bulletproof armor can clearly be seen on the windows. 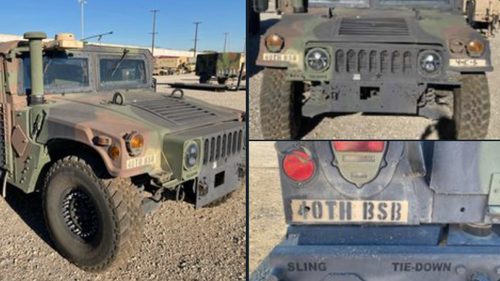 The theft of the combat vehicle comes days before the FBI has warned of  “armed protests” at all 50 state capitols and the US Capitol in Washington, DC, ahead of President-elect Joe Biden’s inauguration on Jan. 20.

So the theft of the combat vehicle makes you wonder if someone or some group will use the vehicle during armed protests expected in the coming days… or is this yet another false-flag-enabling event designed to inspire a crackdown on “domestic terrorism” and the passage of Patriot Act II.