As Rates/Curves Soar, Nomura Sees 3 Trillion Reasons Why ‘Volmageddon 2.0’ May Be Coming

US Treasury yields are soaring higher again today (after a brief pause yesterday), following a report from Politico this morning, eyeing a desire for even-greater stimulus and deficit-spending trajectory from the new US administration:

“Senior Democratic officials have discussed proposing as much as $3 trillion in new spending as part of what they envision as a wide-ranging jobs and infrastructure package that would be the foundation of Biden’s ‘Build Back Better’ program, according to three people granted anonymity to share details of private deliberations.

That would come on top of Biden’s $1.9 trillion relief plan, as well as the $4 trillion in stimulus measures under former president Donald Trump” 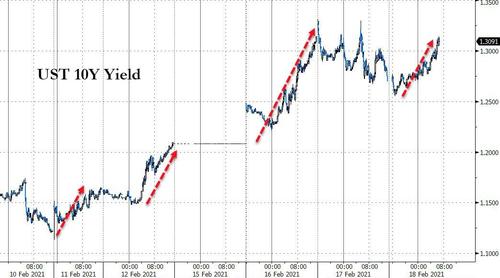 The surge in yields is continuing despite the entire Street urging profit-taking in UST shorts, payers and steepeners as they’ve largely hit year-end targets already, just a month and a half into the year on “reflation renormalization” euphoria now actually showing in hard “prices” and “inflation expectations” data.

However, as Nomura’s Charlie McElligott notes, the fears of the larger UST / Rates selloff triggering a wave of convexity-tied selling / paying does not seem likely to materialize at this juncture, with Banks currently the largest part of the MBS market alongside the Fed; in this case, duration extension risk would likely come as a relief to their de facto “short duration” dynamic (as they are forced buyers due to record deposits), allowing them an attractive buying opportunity.

Additionally, McElligott notes that there are a number of market participants waiting in the wings for repricing lower “buying opportunities”:

1) Japanese investors who are currency-hedged, with FX adjusted yield pickup at multi-year best levels, while too there is likelihood of pensions at best funding levels in years; 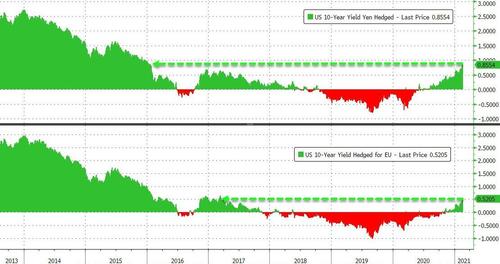 2) ALMs, who are sitting near best funding levels in years, are currently underweight duration, and thanks to the Equities run, would rationally be nearing rebalancing triggers to ADD duration while reducing Equities exposure 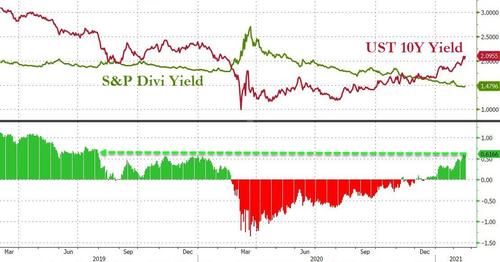 The Nomura strategist points out that with the majority of concerns are currently about the velocity of the Rates / USTs selloff…and when taken into account that “shorts” from leveraged and CTA Trend communities are already well-established, it does seem as-if a new “tie-breaker” sell-flow would be required to press to “substantially new” higher yield levels / steeps.

And any potential stall in the ‘bond yields are rising, and that confirms my these that a return to normalization with massive stimulus and inflation imminent’ narrative could spoil all this euphoric equity buying and, more importantly, vol-selling. 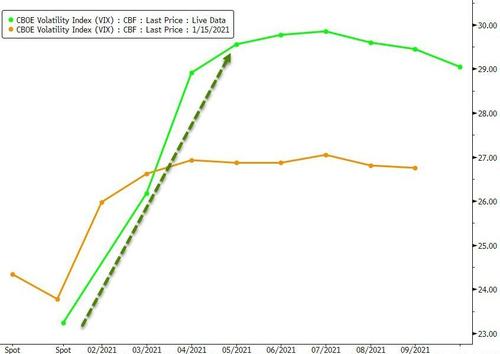 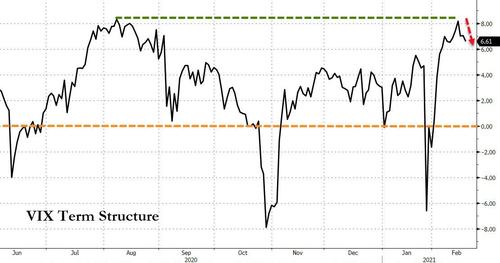 …all while VIX Futs Non-Comm Net Vega sits at just 8th %ile, and Spooz have moved a net 5 handles in 5 days, just ~100bps from all-time highs 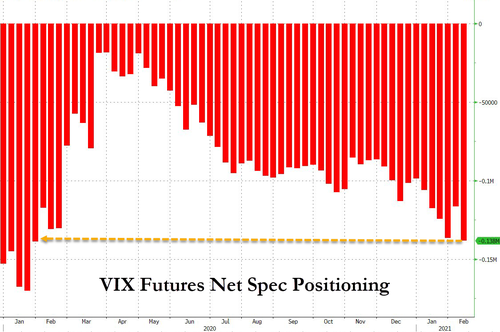 In other words, this means that the size of a position is set to be inversely proportionate to the instrument’s volatility.

The reason all this could be of concern is the worrisome echoes from Feb 2018, home of the “Volmaggedon” Equities Vol shock, driven by the extinction event for most of the leveraged VIX ETN space on account of their impossible supply or demand needs of VIX futs at end-of-day rebalancing, and eerily triggered by Fed policy-tightening concerns after a series of better than expected inflation / price data over the month of January culminated in a big CPI beat the Friday prior to “Volmageddon” on Monday, which “waterfalled” into crescendoed SPX selling, -6.5% in 2 days.

As stated previously, the de-risking “signal” to watch for going-forward is a “spot up, vol up” environment, where there remains potential that VIX is floored ~20, yet further greedy “CRASH UP” grabbing into upside calls / FOMO chasing could certainly re-price Vol HIGHER, as upside remains relatively cheap to downside

Finally, McElligott warns that as a reminder, a sustained “spot up, vol up” is what we saw in August of last year (“Nasdaq Whale” and our first taste of WSB / Robinhood YOLO bois in deep OTM Call creating an enormous “short gamma” impulse) before the September reversal and collapse under itself; and prior to that, the Jan 2018 period, which led up into the “Volmageddon” episode in February thereafter – we are NOT THERE YET, but an overshoot to the upside on greed / sentiment / position could get us there quickly.