Australia remains a key nation among the so-called “Five Eyes” intelligence sharing alliance comprised also of Canada, New Zealand, United Kingdom and the United States – which is why the Tuesday statement of Prime Minister Scott Morrison on WikiLeaks’ Julian Assange is so significant.

Morrison said that Assange is “free to return home” to Australia once legal challenges against him are resolved. This came a day after a UK judged blocked the US extradition request, citing the extreme health risk he would face in America’s federal supermax prison system.

The US is set to appeal the ruling. The next immediate step is Assange’s bail hearing where his legal team will seek his temporarily release from London’s Belmarsh prison, set for Wednesday. 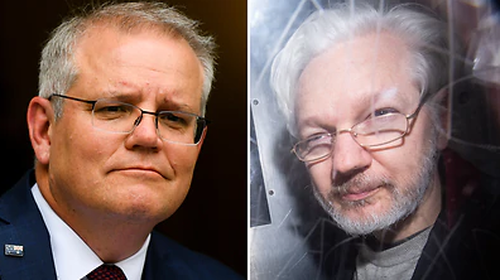 “Assange’s lawyers will request that he be temporarily released from the maximum-security Belmarsh prison, in southeast London, during a hearing at the Westminster Magistrates Court in the capital that will begin at 10:00 GMT,” Al Jazeera writes.

Morrison told a local Australian broadcaster Tuesday, “Well, the justice system is making its way and we’re not a party to that. And like any Australian, they’re offered consular support and should, you know, the appeal fail, obviously he would be able to return to Australia like any other Australian.”

“So, yes, it’s just a straightforward process of the legal system in the UK working its way through,” he added. But in Assange’s case the chances are high that Washington would cook up new charges which could be used to press Australia to extradite him assuming he did ever risk making his way back to Australia, where he’s a citizen. It’s extremely unlikely that he would ever travel to another “Five Eyes” country regardless of such “assurances”, short of all US charges being dropped.

Previously Morrison has been on record as saying he won’t intervene to help Assange in anyway while the US was pursuing him on espionage related charges. “Assange must face the music like any other Australian in hot water overseas,” he once said.

Currently Australian opposition politicians are pushing Canberra to bring pressure on the Trump administration to drop all charges, as The Guardian details:

The Australian government is facing calls from its own Coalition backbench and the opposition Labor party to press the Trump administration to end the pursuit of Julian Assange after a British court ruled out the WikiLeaks co-founder’s extradition to the United States.

With the US government signaling it plans to appeal the court’s ruling, the Coalition backbencher George Christensen and the South Australian independent senator Rex Patrick were among Assange supporters who saw a presidential pardon from Donald Trump as the best way to bring an end to the saga.

There have also been US domestic calls among Trump’s own base for a pardon. But with the London court now ruling not to extradite, the pressure has perhaps been taken off Trump a bit to pursue what in his mind might be a politically costly decision, despite pardon for whistleblowers like Assange and Snowden remaining popular among the US public.