At Least 3 Dead In Austin, Texas; Shooter On The Loose

Update (1551 ET): Austin police have identified the suspect at large, his name is 41-year-old, Steven Broderick.

Austin police are giving an update on the shooting incident in Northwest Austin. A suspect has tentatively been identified as 41-year-old Steven Broderick. Suspect is still at large. People in the area of Great Hills Trail and Rain Creek Pkwy are asked to shelter in place. pic.twitter.com/rSQ7F1Zojt

According to KVUE’s Tony Plohetski, Broderick could be ex-law enforcement.

BREAKING: Authorities believe, based on preliminary information, that the suspect is a former law enforcement officer.

Authorities in Austin, Texas are conducting a massive search after three people were killed in a shooting at Great Hills Trail and Rain Creek Parkway in the Arboretum area, according to local news KXAN Austin. 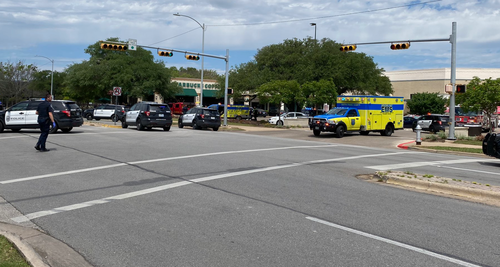 Austin police requested residents in the northwest part of the city to “shelter in place and report suspicious activity.” Police said, “the suspect is still at large,” adding that, “it appears this is a domestic situation that is isolated, and there is no risk to the general public.”

At this time the Great Hills Trail scene is still active. We are still asking residents to shelter in place and report suspicious activity. While a suspect is still at large it appears this is a domestic situation that is isolated and there is no risk to the general public. -PIO8

Police are treating the situation as an “active shooter” and said “PIO en route,” which stands for police intelligence operations.

APD is currently on scene of an active shooting incident at Great Hills Trail and Rain Creek Parkway. All residents are advised to shelter in place and avoid the area. PIO en route. – PIO8

Here are ATCEMS’ updates on the ongoing situation: 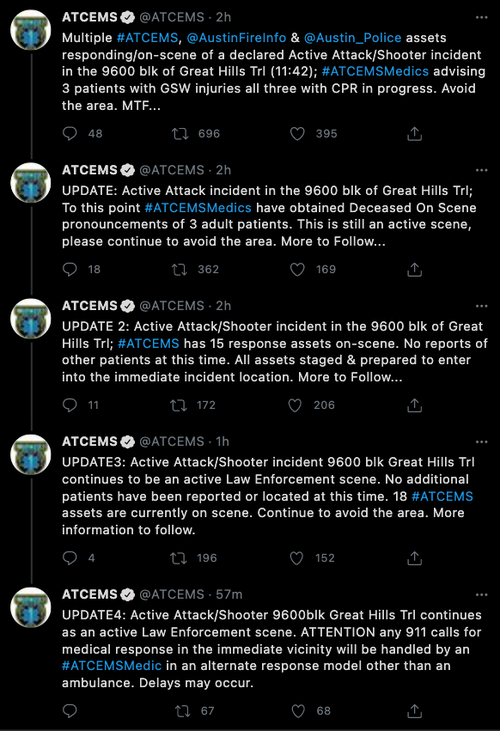 Authorities said no other injuries had been reported. American-Statesman journalist said helicopters circled overhead as officers with combat military gear arrived on the scene searching for the suspect. 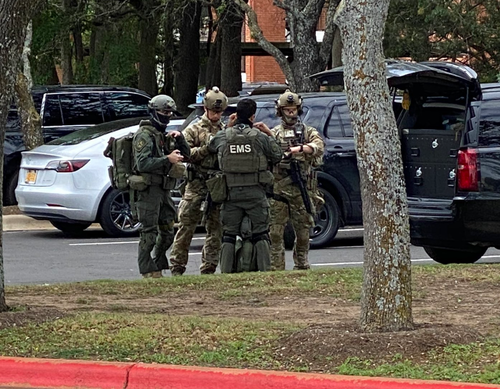 An American-Statesman reporter provides an update on the incident area.

Local news KVUE provides a live update on the shooting.

The timing of this tragic shooting comes as the US has experienced a recent uptick in mass shootings. Just days ago, a 19-year-old male shot up a FedEx facility, resulting in the deaths of eight people.

Are We Facing a Future Where Life Only Goes ‘Back to Normal’ for Rich People?

America Is Not an ‘Idea’