The bearish dollar consensus that opened 2021 looks likely to set off a major meltup. Rampant bets on higher Treasury yields highlight the growing contradiction between the fundamental drivers for foreign-exchange and rates markets. Treasuries have turned into the latest big short, even as dollar bearishness remains rampant. At least one of those trades has to blow up in the next few weeks. 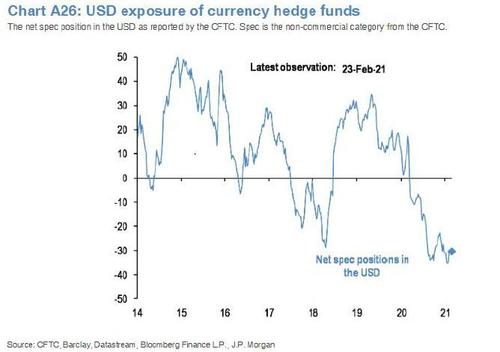 U.S. yields jumped as shorts surged by the most on record, with the frenzy driving repo rates to unprecedented levels. Reflation trades have morphed into straight inflation fears to drive yields higher. 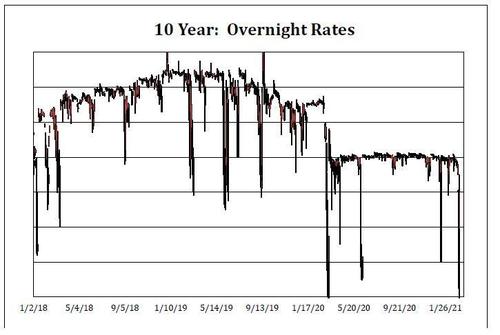 Meanwhile, dollar positioning via CFTC remains entrenched near the strongest levels seen over the past decade. Citigroup’s pain index for the dollar has pulled back from the decade-low hit in December, but is still strongly bearish; Nomura has also been flagging that dollar positioning remains very short and exposed to reversals.

This positioning mix has regularly co-existed since the 2008-9 financial crisis, which is no surprise considering that CFTC data shows speculators have usually been short on 10-year Treasuries for most of that period.

But right now the dynamics look dicey. Inflation driving yields higher as the Fed stands back and cites the moves as an appropriate response to growth doesn’t look conducive for the survival of the dollar bear call that was the overwhelming consensus as 2021 opened.

Those still massive USD shorts echo previous episodes where the dollar surged higher from multi year lows. I flagged the potential for dollar pain last month even as I laid out the long-term case for dollar weakness, one that still has plenty of merit even as the mix of higher U.S. yields and PBOC maneuverings has put the yuan on the defensive.

With yields now in the driving seat for the dollar, Treasury shorts are signaling dollar shorts face the danger of an almighty squeezing. Especially when you consider the sudden rush to short Treasuries wasn’t about hedge funds clamoring to go mega-bear, it was caused by them dashing back into shorts they had almost abandoned.

The five weeks to Feb. 16 saw a net 667,000 bullish shift in CFTC positions across the Treasuries curve, the biggest such move since March 2020. Speculators managed to trim overall shorts to a mere 140,000 by Feb. 23 — the least bearish they’d been since September 2017 when the market was abandoning a brief flirtation with going long U.S. debt.

Speculators were slashing bets against Treasuries as 10-year yields surged to 1.5%, presumably betting that either the Fed would stomp rates back down or that an equities slump in response to elevated yields would set off haven bids for bonds.

Overall Treasuries positioning was still at the less bearish end of the range from the past two years, so the odds are that speculators are busy adding to their shorts, especially considering the special repo pricing seen over the past week.

That puts dollar bears into a lose-lose scenario in the short term. Higher yields mean a grind higher in the dollar in the best case. The worst case is for a risk-asset tantrum that triggers a strong haven bid for the U.S. currency that sets off a short squeeze.