Bank of America Expects The S&P To Return Just 0.2% Over The Next Decade

Pointing to a recent “seismic shift” in assets and resources toward data-driven, fast-money strategies (something we warned about as far back as 2009), Bank of America’s chief equity strategist Savita Subramanian writes that investor eyeballs have “shifted away from long-term, fundamental opportunity sets” as a result of which “the market is rife with long-term inefficiencies.”

This also means that as long-term alpha opportunity has increased to multi-decade highs – for US stocks in particular – lengthening one’s time horizon is “a recipe for loss avoidance”: as shown in the chart below, 10yr S&P 500 returns have been negative just 6% of the time since 1929… 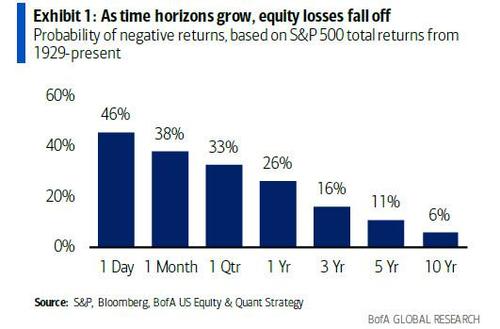 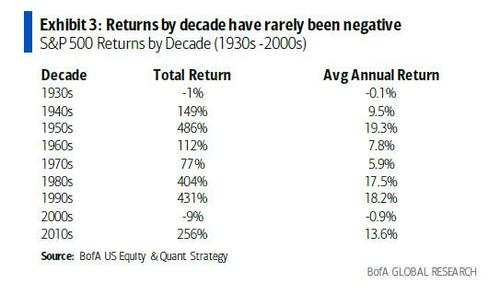 Other asset classes do not sport the same characteristics: since 1929, instances of 10yr negative returns for commodities (based on WTI) have been 30%. 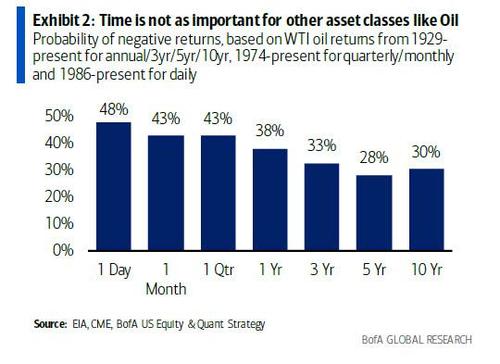 If this sounds like a pitch by BofA to “buy and hold” and to avoid timing the market, it is.

Indeed, in the very next section Subramanian goes on to demonstrate how difficult it is to time the market: as shown in the next exhibit, the S&P 500’s best days generally follow its worst days. Consider that if you sat out the 10 best return days per decade since the ‘30s, your returns would be just 28% vs. 17,715%. 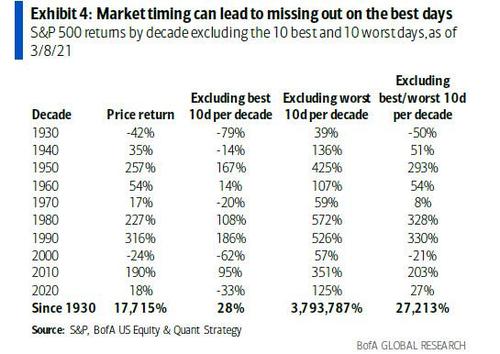 In other words, as BofA recaps, “remaining invested during turbulent times can help recover losses following bear markets – it takes about 1,100 trading days on average to recover losses after a bear market, but some recoveries, like last year’s, are much swifter.” 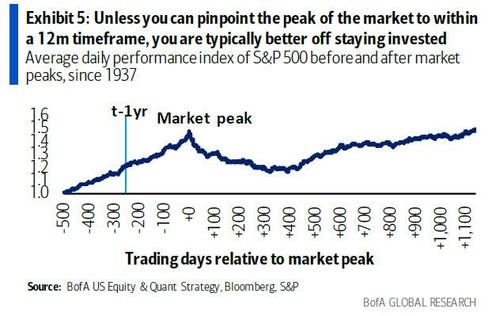 Here BofA asks an interesting tangent: “Is it worse to miss the end of the bull or to catch the start of the bear?” It answers by observing that “investors who sold within a year of a peak had an opportunity to enter at a lower price in the downturn 90+% of the time over the last 84 years. But selling a year or more ahead of a peak cost: on a twelve month basis, the end of the bull market yielded higher returns than losses over the next 12-mths 69% of the time (and 80%+ on a 2-yr basis).”

Ok fine, we get it: market timing is bad, daytrading is a losing game (just ask anyone who just bought GME at $300 or higher), and one should just buy and hold, especially with activist central banks ensuring that nobody ever loses money (even if that “money” gets devalued by $120BN every month).

Or maybe not, because after spending the first half of her report convincing investors that one should just buy and forget to get the best returns, Subramanian then reminds bank clients that the one thing that matters the most for every investment is the cost basis. And it matters a lot. In fact, anyone who buys the S&P500 here, is likely looking at the smallest of gains over the next decade, and realistically has a high chance of being hit with losses.

This is because whereas valuations explain very little of returns over the next one to two years, they have explained 60-90% of subsequent returns over a 10-year time horizon according to BofA, with the price to normalized earnings ratio (the bank’s preferred valuation metric) explaining 80-90% of returns over the subsequent 10 years (here BofA adds that whereas “most other valuation measures have similarly strong efficacy over long time horizons…. we have yet to find any factor with such strong predictive power for the market over the short term.”) 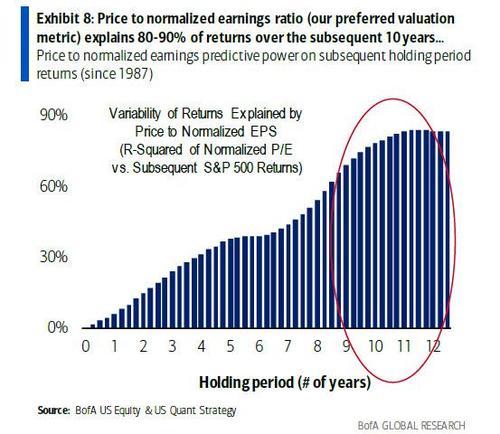 This, needless to say, is a problem because as we have repeatedly shown over the past few months, valuations are at or near all time high levels, and based on an historical regression, today’s price to normalized earnings ratio of 25x yields an expected annual price return of 2%/year for the S&P 500 over the next 10 years, according to BofA. 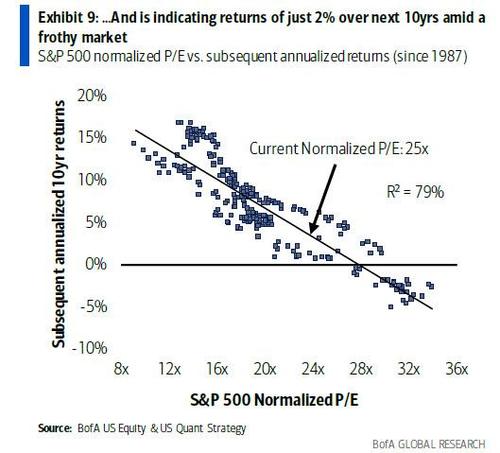 The projected returns are even uglier if instead of using just the normalized PE, one looks at the entire universe of eligible valuation metrics. In that case, the median 10-year return is a tiny 1.0% (with a range of -4% to +5%), while the average return is a virtually meaningless 0.2%…

… which on a real basis assuming inflation of 2% or so, virtually guarantees that stock investors will lose money over the next 10 years.

As even BofA admits, these returns are close to levels that render bonds compelling especially if rates climb to 2.15% on the 10yr Tsy. (which is BofA’s year-end forecast).

Amusingly for BofA the fact that even fully-invested investors who don’t look at the market – or their own P&L – even once over the next decade will barely make any gains is an even more powerful reason to stay invested instead of trying to time the market. Why? Because just one failed attempt to time the market will mean that the borderline probability of loss will become a certainty, to wit:

“a higher probability of loss over periods we saw ~2% annualized returns (1931-41, 1964-74, 1998-2008, similar to what our valuation model suggests today) supports staying invested given the difficulty of market timing.”

While for Bank of America’s institutional clients – who get paid a fee on assets under management – the above logic may work, there are countless investors, retail and otherwise, and generally people who still have savings who would rather not allocate their capital to an asset class which will generate no returns over the next decade even in a best case scenario, and certainly not if the Fed’s inflation targeting policies work and push real returns deeply negative. This is also a huge problem for pensions which still optimistically assume they can generate a 6-7% return on their stock investments year after year.

As for those investors who are willing to reallocate away from stocks to bonds now that 10Y returns are roughly the same, we wish you luck: all that needs to happen is for inflation to remain dormant. The problem is that we now know that both central banks and governments will do everything in their power to cause a runaway (if controlled) inflation.

Which is why to us the take home message is just the opposite of BofA’s: putting money in stocks now is a fool’s game, whether one tries to time the market or not, as such capital flowing into other non-traditional assets such as commodities, precious metals and gold will only accelerate over time.