“Begging The Fed For Guidance”: BofA Expects The Fed To Address Markets “As Soon As This Week” 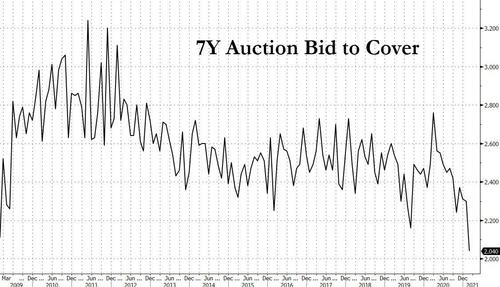 … and a record plunge in Indirect (foreign) demand… 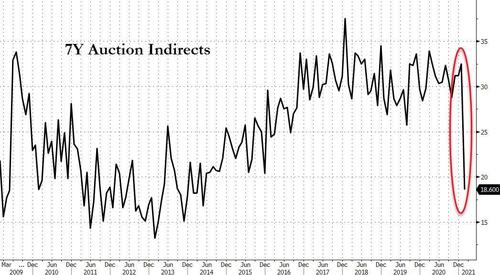 … and which triggered a stop-loss liquidation cascade across the curve, but nowhere more so than in the 5Ys… 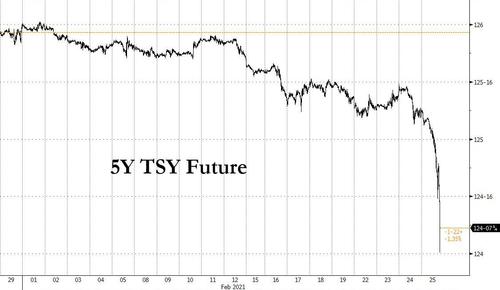 … we said that it is of utmost urgency for the Fed to step in and restore some stability in what is – at least in theory – the world’s most liquidity bond market.

The Fed really needs to make an announcement here. What is going on in TSYs is not normal

So far the Fed has refused to intervene and stabilize the bond market, despite a surge in bond implied volatility that threatens to spillover in deeper into stockland and hammer the VIX. 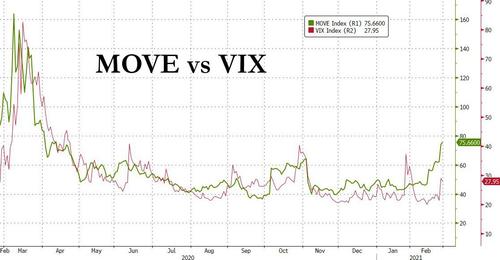 Curiously, with European nominal rates still deeply negative despite the recent rout, it was an ECB banker – Greek Yannis Stournaras – who yesterday became the first to openly call for more QE in response to the soaring yields (here the “thinking” supposedly goes that when a flood of money finally triggers the inflation central bankers have been demanding for years, they want to add even more money to counterbalance it’s effect. Yes, this idiocy is considered high economic thought these days.)

In any case, on Friday Bank of America agreed with our view that some verbal Fed intervention is paramount, writing that “the market is begging the Fed for greater guidance” – something the Fed has generously provided in the past during times of market stress – and states that it now “expects the Fed to clarify policy expectations in the March FOMC meeting.”

Why? Because, as BofA chief economist Ethan Harris writes, “the Fed is in a bind” since rising interest rates (“shall we say tantrum?”), prompted a tightening of financial conditions, yet at the same time the market is adamant that “higher rates may be justified.”

Harris then notes that “since the Fed relies on “open mouth operations” to guide markets when the policy winds shift” it has become quite clear that “markets are asking for greater guidance.” Something we tweeted two days ago. Harris’ conclusion: a shift in Fed speak is coming at the upcoming FOMC meeting.

So what could the Fed say?

Looking back at prior policy shifts, BofA notes that the Fed has experimented with different forms of “open mouth operations.” 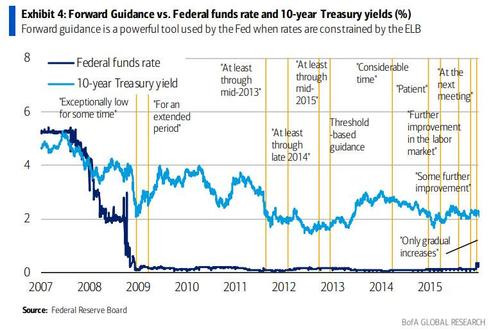 Early in the cycle, the Fed embraced threshold-based guidance. The prime example was between Dec 2012 and Dec 2013 when the Fed promised to keep rates at the zero-lower-bound until the unemployment rate fell below 6.5%. It turns out that NAIRU was a lot lower than 6.5%.

The Fed then pivoted to qualitative guidance. By March 2014, the Fed noted that rates would remain low for a “considerable time” after the asset purchase program ended. In December 2014, the Fed introduced the idea of “patience” in the path to normalizing rates. The buzz word of patience lasted until the summer when it started to lose favor.

By October 2015, the Fed statement discussed “whether it would be appropriate to raise the target range at its next meeting.” Back then, it took about 6 months for the Fed to transition the message and set the stage for hikes.

What is the take home lesson to Bank of America from these examples?

As to why the Fed needs such a lengthy lead-in period, Harris puts it, “don’t tighten before you want to tighten” and explains that “on the one hand ‘open mouth operations’ avoid big market surprises when policy is changed. On the other hand, by shifting guidance slowly and well in advance, markets respond early and financial conditions tighten earlier too.

“And so by the time the Fed hikes, the market is over it.”

That means that far from the Fed keeping silent until 2023 or even 2022 before addressing the violent tightening in financial conditions – as by then the bond market could well be in ruins – it will instead have to do so as soon as March 17 FOMC meeting which is in two weeks, when BofA warns to “expect the Fed to clarify policy expectations.” In fact, the bank cautions, that “if the abrupt market moves persist, Fed officials might speak up as early as this coming week.”

Be a Rock for Another