The Fed’s latest Beige Book released this afternoon, confirmed what we all knew: that U.S. economic activity has picked up strongly into the new year, and as a result the various regional Feds upgraded its description of the economic expansion to “moderate” from “modest” with consumer spending improving thanks to the trillions in Biden stimulus.

“National economic activity accelerated to a moderate pace from late February to early April,” said the Beige Book, which was based on information collected by the Fed’s 12 regional banks through April 5. “Consumer spending strengthened. Reports on tourism were more upbeat, bolstered by a pickup in demand for leisure activities and travel.”

Observations on Employment and Wages

And the all-important Prices, i.e. inflation

Here are some more details by Fed District:

The regional economy declined modestly, with particular weakness in the service sector. The labor market has remained sluggish, though wage growth accelerated. Businesses reported further acceleration in prices, as well as increasingly widespread supply disruptions. Contacts across a wide variety of sectors expressed increased optimism about the near-term outlook.

Business activity rebounded to a modest pace of growth during the current Beige Book period. COVID-19 cases waned and restrictions eased, but economic disruptions continued. On the whole, activity remained below levels attained prior to the pandemic. Employment rebounded – growing slightly – as wage growth and prices picked up to modest and moderate paces, respectively.

The District’s economy regained momentum, reflecting declining numbers of coronavirus infections and various fiscal support measures. That said, activity remains below prepandemic levels for most firms, and supply chain disruptions restrained output for many firms. Such disruptions also led to sizable increases in nonlabor costs. Hiring activity remained modest, although a greater share of firms reported they were raising wages.

Reports from contacts indicate that economic conditions have been generally unchanged since our previous report. Overall, the outlook among contacts continued to improve and is generally optimistic. Contacts noted a high degree of uncertainty about the pace of recovery, which they linked to vaccine rollout and efficacy.

The District economy expanded at a moderate pace, though output in most industries remained below normal levels. Unprecedented winter storms and widespread power outages in mid-February severely disrupted economic activity, though the impact is mostly expected to be transitory. The housing market continued to be a bright spot, and energy activity improved further. Employment rose and wages increased moderately. Outlooks were generally positive, but uncertainty persisted.

Economic activity in the District expanded at a modest pace as labor markets deteriorated somewhat. Wages and inflation picked up. Retail sales improved, but activity in the services sector declined moderately due to ongoing pandemic-related restrictions. Conditions in the agricultural and manufacturing sectors strengthened modestly. Residential construction and lending activity continued to be strong.

So with the economy firing on all cylinders, it’s hardly a surprise that the number of instances of the word ‘slow’ in the Beige Book dropped to just 12, almost half the 23 noted last month, while references to covid or virus also tumbled as the US is clearly ready to move on. 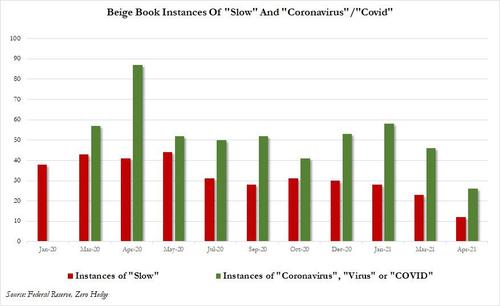