Authored by Frank Fang via The Epoch Times,

The Chinese communist regime is accelerating its plans to invade Taiwan, an expert warns, as Beijing ratchets up military maneuvers against the island. 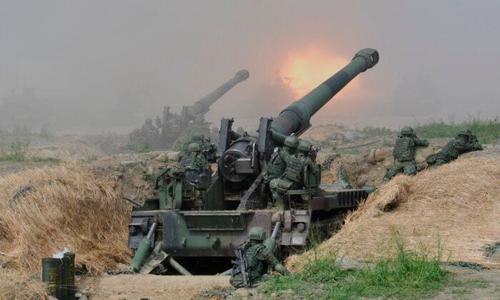 The incursion caps off a significant increase in hostility by Beijing against Taiwan since 2020. Taiwan’s President Tsai Ing-wen, re-elected last January, has taken a hard line against threats posed by the Chinese Communist Party (CCP), while the island has deepened its cooperation with the United States—prompting the regime to escalate its warmongering towards the island.

The CCP sees Taiwan as a part of its territory and has threatened war to bring the island under its fold. The self-ruled island is in reality a de-facto independent country with its own democratically-elected government, military, constitution, and currency.

The Republic of China (ROC)—Taiwan’s official name—overthrew China’s Qing Dynasty emperor in 1911. After the ROC retreated to Taiwan upon being defeated by the CCP during the Chinese Civil War, the CCP established a communist state called the People’s Republic of China (PRC) in 1949, while Taiwan gradually transitioned to become a democracy. But to this day, the Chinese regime has refused to recognize Taiwan’s sovereignty.

Last year, the Chinese air force flew about 380 sorties into Taiwan’s ADIZ, the highest number in a given year since 1996. So far this year, the Chinese military has been sending aircraft into the ADIZ on a near-daily basis.

The island’s coast guard on April 1 announced that Beijing has been flying unmanned drones near Taiwan’s Dongsha Island, located in the northern part of the South China Sea. The authority said it could not rule out that Beijing was using the drones to carry out reconnaissance.

Alongside military actions, the regime has sharpened its rhetoric towards the island. Earlier this year, a Chinese defense spokesperson threatened war against Taiwan if it declared independence.

On March 31, Hu Xijin, editor-in-chief of hawkish state-run media Global Times, wrote on his social media, that he would like to order able-bodied men to go blow up bunkers in Taiwan in the event of war.

An unnamed Chinese pilot, who flew one of the Chinese aircraft crossing into Taiwan’s ADIZ on March 29, said, “This is all ours” after being asked to leave the airspace by the pilot of a Taiwanese interceptor aircraft, according to local media, who obtained a recording of the pilot’s remark from the Facebook page “Southwest Airspace of TW.”

Beijing’s incursions are part of a series of dry runs in preparation for an invasion of Taiwan, John Mills, the former director of cybersecurity policy, strategy, and international affairs at the Office of the Secretary of Defense, told The Epoch Times.

Mills projects that these exercises could culminate in a large-scale dry run in the next two years. These dry runs are necessary, Mills said, given the complexity of amphibious landing operations—as well as how the Chinese military has never conducted a forced landing on a hostile power in a real-life situation before.

He believes that an invasion could come in the next three years—much earlier than the six-year estimate given by U.S. Adm. Philip Davidson, head of the U.S. Indo-Pacific Command (INDOPACOM), during a congressional hearing in early March.

“If they haven’t done in 10 years, I think [Chinese leader] Xi [Jinping] will probably have been removed from office. I think even six years is pushing it,” Mills said. He added that Xi could come under pressure to attack Taiwan to deflect attention away from internal problems, such as an economic crisis.

U.S. Adm. John Aquilino, the nominee to replace Davidson as head of INDOPACOM, at his confirmation hearing in March declined to endorse Davidson’s six-year estimate, but said the threat of a Chinese invasion is “much closer to us than most think.”

This point was echoed by former national security advisor H.R. McMaster, who in March said that Xi believes “he has a fleeting window of opportunity that’s closing” in relation to attacking Taiwan. McMaster said the period from 2022 onward marks the time “of greatest danger” to Taiwan, noting that this coincides with after the conclusion of the 2022 Beijing Winter Olympics.

But right now, the Chinese military is still not ready for an attack against the island, Mills said. The problem is, however, that the longer it waits to invade, the more ready and fortified Taiwan will be.

“We all need to be aware of and be ready for an acceleration of these timelines,” Mills warned.

Beijing’s Taiwan ambitions stem primarily from its desire to get its hands on the island’s semiconductor-making capability, according to Mills. Taiwan is home to TSMC, the world’s largest contract chipmaker.

China is heavily dependent on foreign semiconductors—tiny chips that power everything from cellphones to missiles. According to Bloomberg, China imported $380 billion-worth of chips in 2020, accounting for about 18 percent of all its imports.

The regime is now struggling to secure foreign semiconductors following a series of sanctions slapped on Chinese companies by the Trump administration. U.S. sanctions have crippled the smartphone business of Chinese tech giant Huawei. Chinese chipmaker SMIC has also been put on a trade blacklist.

Hitting Back at US

Soong Hseik-wen, a professor at the Institute of Strategic and International Affairs (ISIA) of Taiwan’s National Chung Cheng University (NCCU), told The Epoch Times that the Chinese regime was making a statement with its incursion on March 26, in response to actions by the U.S. government in March.

These events included President Joe Biden’s first summit with Quad leaders from Australia, India, and Japan; the meeting in Tokyo between Secretary of State Antony Blinken, Pentagon chief Lloyd Austin, and their Japanese counterparts; and the Sino-U.S. talks in Anchorage, Alaska, according to Soong.

“These three events showed that there are structural conflicts between China and the United States, and they cannot be resolved through diplomatic negotiations,” he said.

The two-day talks in Anchorage were marked by heated exchanges on March 18, during which the CCP’s top diplomat Yang Jiechie lashed out at U.S. foreign and trade policies, and over what he said was the United States’ struggling democracy and poor treatment of minorities.

The meeting highlighted how far apart the Chinese regime and United States are on critical issues, as the Chinese delegation rejected U.S. concerns about Beijing’s human rights abuses in Xinjiang, its crackdown on freedoms in Hong Kong, and its intimidation of Taiwan, on the grounds that they were China’s “internal affairs.”

Viewing U.S. actions as escalating efforts to confront the regime, Beijing decided to flex its military muscle by sending a large aircraft squadron into Taiwan’s ADIZ on March 26, Soong said.

A bilateral agreement on coast guard cooperation between Taiwan and the United States—signed the day before the incursion—may have played into Beijing’s plan to take military action against Taiwan on March 26, Soong added. The agreement, he said, was a clear attempt to push back against Beijing after it passed a law in January to allow its coast guard to fire on foreign ships if needed.

With the agreement, the U.S. government was “explicitly saying” that the coast guard would also be a part of its maritime strategy to secure peace and stability in the region, Soong said.

China’s coast guard law has drawn widespread concern from its neighbors, including Japan, the Philippines, Taiwan, and Vietnam.

On March 28, U.S. Ambassador to Palau John Hennessey-Nilan arrived in Taiwan as part of a Palau delegation headed by President Surangel Whipps. Palau is one of Taiwan’s 15 diplomatic allies.

Soong suggested that Beijing could have received intelligence of the U.S. ambassador’s visit to Taiwan, which would have prompted Beijing to show its disapproval, since the visit marked the first time a sitting U.S. diplomat has traveled to Taiwan since Washington ended diplomatic ties in favor of Beijing in 1979.

Kelly Craft, former U.S. Ambassador to the United Nation, was originally going to visit Taiwan in mid-January, before her trip was canceled at the last minute.

In the face of an escalating military threat from China, Mills said the Biden administration should adopt an unambiguous policy of deterrence towards the CCP. Specifically, Mills said the United States should have a visible navy and air force presence around Taiwan, as well as in the East China Sea and the South China Sea.

Boosting Taiwan’s self-defense capability is also important, and the Biden administration should sell the island any weapons that it asks for, in accordance with the Taiwan Relations Act, according to Mills. Under the legislation, the United States is obliged to supply the island with weapons needed for its self-defense.

Finally, the Pacific Deterrence Initiative (PDI) created under the fiscal 2021 Pentagon spending bill, would also be vital for U.S. forces in defending the region, Mills added. The PDI, akin to the European Deterrence Initiative, is aimed at securing advanced military capabilities to deter China’s military threats in the Indo-Pacific region.

To defend against a possible invasion, Taiwan “can never have enough ammunition,” Mills said, adding that the island’s recent move to begin producing long-range missiles that could reach deep into mainland China was a “big deal.”

Taiwan’s missiles are “a clear message that they’re going to reach out and inflict cost,” according to Mills.

Soong suggested that the Biden administration could support Taiwan in two ways: assisting Taiwan to participate in international organizations and welcoming Taiwan to become a part of a “trusted industry alliance.”

In February, Biden signed an executive order to begin a 100-day review of U.S. supply chains in several key sectors, including semiconductors, pharmaceuticals, and rare-earth minerals.

The American Institute in Taiwan, the de-facto U.S. embassy in Taiwan, announced on April 1 that a virtual forum was held on Wednesday between high-level Taiwanese and American officials, to discuss the effort to expand Taiwan’s participation in “U.N. organizations and other international fora,” including the World Health Organization (WHO).

Taiwan is currently not a member of the WHO because of Beijing’s objections.

The Biden administration could also take active steps to enforce several pieces of pro-Taiwan legislation that were signed into law by former President Donald Trump, Soong said. The legislation includes the Taiwan Travel Act, the TAIPEI Act, and the Asia Reassurance Initiative Act.

As a result, Soong said that some European and Asian countries, in particular Japan and Australia, are observing Taiwan closely to see whether cooperation between Taipei and Washington is solid.

“These countries are watching how the U.S. government will enact these legislation, questioning whether it will pay lip service [about U.S. commitment to allies’ security] under certain situations,” explained Soong.

The Biden administration has said its commitment to Taiwan is “rock-solid.” But according to Soong, how serious the administration is in defending the island remains to be seen, especially given that Biden himself has never used the word “threat” to describe the CCP.

Biden has instead framed the regime as America’s “most serious competitor.”

Soong said he foresees the United States and China engaging in small-scale military conflicts in the near future, especially at two Taiwan-controlled islands in the South China Sea—Dongsha and Taiping.

“I believe the United States and China are in a new cold war,” Soong said.

What the Next American Civil War May Look Like