Just over 12 years after he was jailed for the largest ponzi scheme fraud ever, AP reports that Bernie Madoff has died in a federal prison.

Madoff died at the Federal Medical Center in Butner, North Carolina, apparently from natural causes, according to a person familiar with the matter.

Last year, Madoff’s lawyers filed court papers to try to get the 82-year-old released from prison in the COVID-19 pandemic, saying he had suffered from end-stage renal disease and other chronic medical conditions. The request was denied. 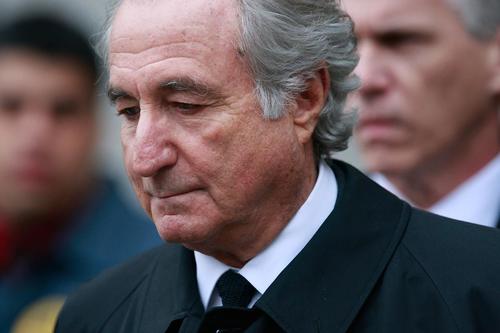 A court-appointed trustee has recovered more than $13 billion of an estimated $17.5 billion that investors put into Madoff’s business.

At the time of his arrest, fake account statements were telling clients they had holdings worth $60 billion.

Bernard Madoff, a renowned Wall Street trader, initiates a scheme to defraud his investment clients. He eventually accepts billions of dollars from individual investors, charitable organisations, pension funds, hedge funds, and others. He claims that his sophisticated trading and hedging strategy will produce investment gains in all market conditions, though securities regulators later say he never traded any shares for client accounts.

Ruth Madoff withdraws $5.5m from a Madoff-linked brokerage firm. She withdraws another $10m on 10 December.

Bernard Madoff tells a senior employee of his investment firm that clients had requested $7bn in redemptions, and he was having trouble coming up with the cash to fulfil the withdrawals.

Madoff tells his sons that the business was “all just one big lie” and “basically, a giant Ponzi scheme”. He estimates the fraud to be $50bn. Prosecutors later allege that the combined balance on client statements was approximately $64.8bn.

Madoff surrenders to authorities, saying “there is no innocent explanation”. Madoff is freed on a $10m bond. Federal prosecutors eventually charge him with fraud, international money laundering, lying to federal securities regulators, and other counts.

A federal judge appoints a trustee to find funds to restore to Madoff’s victims, who number roughly 4,800 in the US and abroad.

Madoff’s wife surrenders her passport. He is confined to his luxurious $7m Manhattan apartment and ordered to wear an electronic tag after failing to find anyone outside his family willing to guarantee his $10m bail.

French hedge fund manager Thierry de la Villehuchet is found dead in an apparent suicide. His company Access International Advisers lost as much as $1.4bn of its clients’ money in Madoff’s scam.

Prosecutors reveal Madoff distributed $1m worth of jewelry and personal possessions to friends and relatives. Prosecutors say he violated an order freezing his assets.

Prosecutors reveal Madoff had $173m in signed cheques in his desk when he was arrested, which they argue show he sought to keep assets from fleeced investors. Prosecutors ask Judge Ronald Ellis to send Madoff to jail; Ellis declines.

Madoff avoids jail when judge rules he can stay in his $7m apartment but must submit to mail searches.

Financial services regulators say no evidence exists that Madoff ever traded a single share on behalf of his investment clients, in more than 40 years of examining his books.

Madoff jailed after pleading guilty to all 11 charges against him.

Madoff appeals for bail and reveals his wife’s huge fortune.

US authorities to seize $69m of assets held in Ruth Madoff’s name, including a Manhattan penthouse and $17m bank account

Madoff fraud victim, William Foxton, 65, killed himself amid claims he was unable to face the shame of losing his family savings through the Ponzi scheme.

More than 100 former clients who lost money in Madoff’s Ponzi scheme outline the devastation wreaked on their lives in statements to the judge conducting the case.

Madoff sentenced to 150 years in prison. He said he has left “a legacy of shame”, while victims applaud the maximum sentence.

Madoff tells a lawyer that he was “amazed that he got away with it” for so long and thought several times when meeting SEC officials that “they got me”.

A trustee for Madoff’s victims launches legal action against UBS for “enabling” the fraud. Goes on to sue JP Morgan and HSBC.

Mark Madoff, Bernard’s son, is found dead in his apartment on the second anniversary of his father’s arrest.

Madoff tells his biographer that banks knew he was committing fraud but chose not to do anything about it.

Rabo: To Inflate AND Not To Inflate, That Is The Question

Risk Accumulates Where No One Is Looking For It