The Biden administration and Congressional Democrats are set to unveil what the Associated Press described as a “major immigration overhaul that would offer an eight-year pathway to citizenship to the estimated 11 million people living in the US without legal status.” 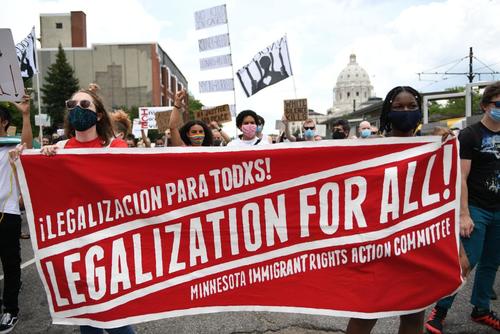 The legislation will be released in detail Thursday morning, and is expected to contain ‘broad priorities for immigration reform’ that Biden promised during his first day in office – including increasing the number of visas issued, new technology at the southern border, and funds to process asylum applications.

The bill would immediately provide green cards to farm workers, those with temporary protected status and young people who arrived in the U.S. illegally as children. For others living in the U.S. as of Jan. 1, 2021, the plan establishes a five-year path to temporary legal status, if they pass background checks, pay taxes and fulfill other basic requirements. Then, after three years, they can pursue citizenship.

The plan would raise the current per-country caps for family and employment-based immigrant visas. It would eliminate the penalty barring those immigrants who live in the U.S. without authorization and who then leave the country from returning for three to 10 years. It also would provide resources for more judges, support staff and technology to address the backlog in processing asylum seekers.

The bill would expand transnational anti-drug task forces in Central America and enhances technology at the border. And it would try to reduce the burden at the border by setting up refugee processing in Central America, to try to prevent some of the immigrant caravans that have overwhelmed border security in recent years. –Associated Press

Also included in the plan is $4 billion allocated over four years aimed at boosting economic development and tackling corruption in Latin American countries – which sounds like a giant, undefined slush fund.

The full text of the bill will be unveiled by lead sponsors Rep. Linda Sanchez (D-CA) and Sen. Bob Menendez (D-NJ) – the latter of whom was part of the bipartisan Gang of Eight senators who negotiated a 2013 immigration reform bill that ultimately failed.

“The president feels that all of these requirements that are in the bill — these components of the bill — are what makes it comprehensive,” said White House press secretary Jen Psaki this week. “They all need to be addressed. That’s why he proposed them together.”