Biden Has No ‘Intention’ To Meet With N.Korea’s Kim, Vows “Additional Actions”

Tensions between North Korea and the Biden administration are on the rise after the US and South Korea announced they are resuming military drills and Pyongyang conducted missile tests. 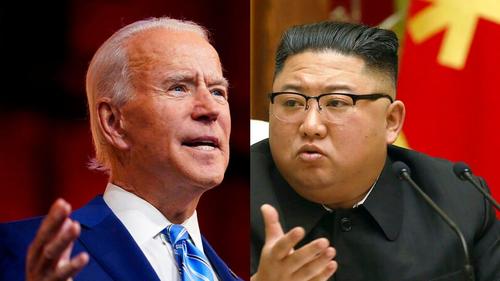 At his first press conference last week, President Biden vowed a “response” if North Korea chooses to “escalate” further, but also said he was prepared for “some form of diplomacy” with North Korea.

When asked if Biden’s plans for diplomacy could include meeting with Kim, Psaki said, “I think his approach would be quite different, and that is not his intention.”

Considering what President Biden has said about former President Trump’s meetings with Kim, it’s no surprise the new administration has no plans for face-to-face talks. At the presidential debate last October, Biden slammed Trump for his relationship with Kim.

“He’s talked about his good buddy, who’s a thug,” Biden said of Kim at the time.

“That’s like saying we had a good relationship with Hitler before he invaded Europe — the rest of Europe. Come on.”

Also on Monday, US Ambassador to the UN Linda Thomas-Greenfield said the US was looking at taking “additional actions” in response to the recent missile test, although it’s not clear what actions those actions could be.

Biden’s going to set things straight with Kim Jong-un just like he dealt with Corn Pop back at the pool in 1962 https://t.co/nkXPOLIKjL

The Biden administration is currently reviewing its North Korea policy, but US officials are calling for a denuclearization of the Korean Peninsula, which is a non-starter for negotiations with Pyongyang.

A realistic approach that was explored by the Trump administration would be to offer sanctions relief in exchange for a freeze in North Korea’s nuclear arsenal.

Trump returning to social media on his ‘own platform’