As we reported last week, every day of President Biden’s 10-day sprint out the gate is supposed to have a “theme”. Thursday’s was fighting the coronavirus pandemic. Friday’s was economic/racial inequality.

Now, as Nancy Pelosi and the rest of Biden’s Congressional allies continue with their push to (retroactively) impeach President Trump, President Biden is outright stealing one of his predecessors’ most popular ideas. Like Trump before him, Biden is signing a “Made in America” executive order to increase the amount of federal spending that goes to American companies. 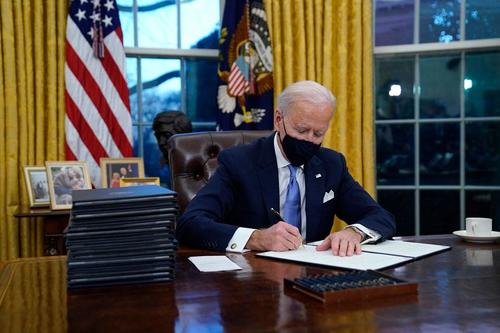 Currently, the federal government spends about $600BN on contracts per year, and while there are already rules in place governing how taxpayer dollars can be spent, and how many foreign products can be purchased, there are many waivers and loopholes that allow for more foreign components and parts to be used, depending on the contract.

Biden’s new executive order will, according to his administration, close some of these loopholes and limit the number of waivers, as well as order an increase in domestic content of parts used in these contracts.

The order will also redefine what can count as domestic product, while creating a public website so US companies can more easily see government contracts being offered and determine whether they could potentially make a competitive bid.

Additionally, The executive order will also create a new senior role at the OMB to oversee whether the Biden team is implementing these efforts.

One reporter said the goal is to make small changes that add up to major windfalls for American companies, while also ensuring companies can’t get around the new rules.

“The goal is to make sure that companies can’t undermine or get around the purpose of the Made in America rules by importing largely foreign made products, making modest changes or tweaks on shore that add little value for American workers or American industry, don’t actually utilize America’s manufacturing capabilities, and will also close loopholes so that content rules drive new opportunities for American businesses and workers,” a senior administration official said on a call with reporters.

“[Monday], he’s going to take a major step toward his goal of rebuilding the backbone of America, manufacturing, unions and the middle class, and it’s based on his that, making sure that we are making things in America and all of America is core to our economic strategy.”

If Biden’s “Made in America” effort sounds familiar, that’s probably because Trump signed an executive order in April 2017 instructing the government to review federal contract requirements to “Buy American” and minimize any waivers or exceptions.

Much of Biden’s EO closely echoes the “Buy American” part of Biden’s Build Back Better policy which was highlighted during the campaign where Biden pledged to crack down on false advertising regarding products that claim to be “made in America”.

“A Fake Candidate Who Didn’t Actually Run a Campaign – No Way He Got 81 Million Votes. It’s a Fraud!” – EPIC! Former GOP Spox Goes Off on Joe Biden Charade (VIDEO)

Get Ready For Services Prices To Accelerate Higher