Biden Post-Mortem: Cheat-Sheets & A Trip Into An Alternate Reality

RealClearPolitics’ Philip Wegmann noted, reflecting on yesterday’s first ‘meet the press moment’ for Joe Biden, that the new president started with good news. Joe Biden told reporters assembled at the White House for his first official press conference that he now expects 200 million doses of the COVID vaccine will be administered by the end of his first 100 days in office. And that’s not all.

He expects the majority of K-8 students will soon be back in the classroom. He announced that more than 100 million Americans have cashed their $1,400 relief checks. He was pleased to report that unemployment is down and economic growth projections are up.

There was more work to do, certainly, Biden admitted, “but I can say to you, the American people, help is here and hope is on the way. Now, I’ll be happy to take your questions.”

And with that brief victory lap, the global pandemic that has taken some 547,000 lives in this country alone was quickly forgotten, at least by Biden’s media interlocutors. The president was confronted instead with questions about voting rights, the situation at the southern border, his plans for the 2024 campaign, the Senate filibuster rule, the lack of bipartisanship on Capitol Hill, American troops remaining in Afghanistan, and more.

It was exactly one hour and two minutes of a certain sort of normal — very different from that of the last four years. The press didn’t shout, and the president didn’t yell or call the reporters names. But the return to normal came courtesy of the same old Biden. For anyone not already familiar, it was an introduction to the 78-year-old politician in all his long-winded, sometimes meandering, gaffe-prone glory. 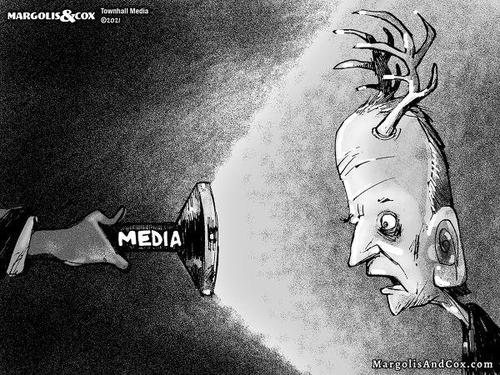 Biden insisted the surge in illegal immigrants is not the result of a change in policy, despite the fact that he publicly placed a 100-day moratorium on deportations, reaffirmed his commitment to “Dreamers,” and halted construction of the border wall — all on his first day in office. No, the challenge on the border, the situation his administration has refused to call a crisis, he said, is just the normal cyclical course of events.

The question of immigration reform finally funneled down to the filibuster, and then things went a little sideways for the new president:

“Let’s deal with the [filibuster] abuse first,” Biden said, noting that he wouldn’t oppose certain changes, like making senators filibustering actually hold the floor and keep talking until they no longer can. But while the president said he agrees the procedure is “a relic of the Jim Crow era,” he does not support abolishing it just yet.

“I’m going to say something outrageous,” the president said before noting something he repeated again and again on the campaign trail: “I’ve never been particularly poor at calculating how to get things done in the United States Senate.”

Then came a word-salad:

“The best way to get something done, if you hold near and dear to you that you like to be able to … anyway, we’re ready to get a lot done.”

And finally, in the same answer, was a warning to Republicans:

“If we have to, if there’s complete lockdown and chaos as a consequence of the filibuster, then we’ll have to go beyond what I’m talking about.”

The White House press corps was not in the mood to push back Thursday. Left unsaid was the fact that, according to the RealClearPolitics average of the presidential approval ratings, Biden has yet to unite the country. While 53% of the public likes the job he is doing, 43% does not.

There were plenty of other questions. Most didn’t lend themselves to the victory lap that the White House would have liked to take on vaccine distribution or stimulus checks. Biden was asked what he thought of Republican efforts at the state level to overhaul voting laws and include new restrictions. He said they were “pernicious” and “un-American” and “sick.” The effort in Georgia, he said in one strained metaphor, “makes Jim Crow look like Jim Eagle.” 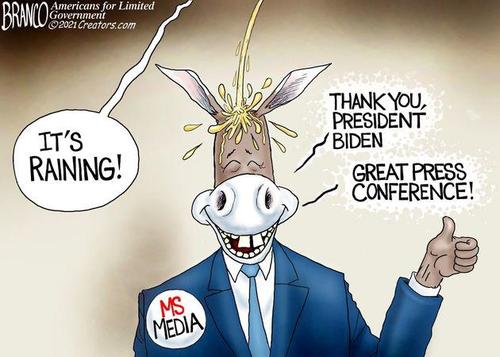 As the conference wore on, Nebojsa Malic notes in an excellent RT op-ed, that Biden started rambling more and more.

On Afghanistan, he said the decision to miss the May 1 withdrawal deadline was “tactical” (the actual talking point is “logistical”), then said “if we leave,” only to correct himself to “we will leave, the question is when.”

On China, he said the US doesn’t seek confrontation but competition – before going off on a tangent about a civilizational clash of “autocracies” and “democracies” that will shape the world for years to come. When asked about gun control, he gave a lengthy, rambling answer about… infrastructure.

It was at that point I had a sudden flash of recognition: I’m watching Taravangian, on one of his bad days.

The character from the prolific fantasy author Brandon Sanderson’s door-stopper saga ‘The Stormlight Archive’ had made a bargain with a supernatural power – to save humanity, he says. As a result, he wakes up feeling different every morning: either a genius or a barely functioning idiot, with his sense of compassion inversely proportional to his intelligence.

As with every analogy, this one isn’t perfect. But after Thursday, President Kamala Harris looks like something that will happen sooner, rather than later. 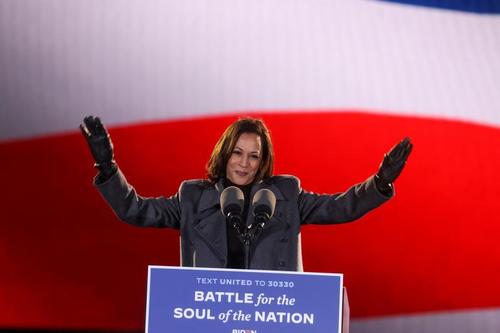 As Stephen Lendman raged following what he called “a charade of a presser,” Biden showed the world yesterday that he is too cognitively impaired to carry out the duties of the office he was selected, not elected, to hold.

Biden has lost touch with reality, affairs of state handled by others in his name – including contacts with foreign leaders by unelected president-in-waiting Kamala Harris.

…including names and images of reporters to know who asked questions. 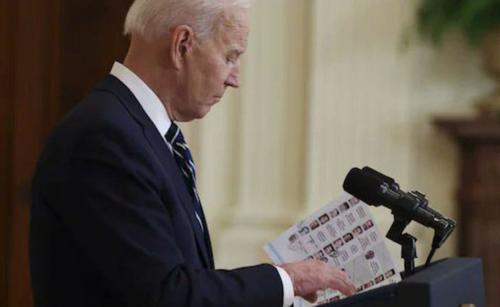 How much longer this charade can go on is an open question.

If not for establishment media keeping things under wraps, it would have been publicly exposed long before last November’s selection process.

All the while, hardliners in charge of his regime’s domestic and foreign policy are running wild.

They’re inflicting enormous harm on ordinary Americans — notably by pushing seasonal flu-renamed covid mass-jabbing with toxic drugs — and heightening tensions by threats against China, Russia and other nations free from US control.

The deplorable state of America today is disturbing and frightening.

Things shifted from a billionaire, bombastic, reality TV president to a hollow one.

The self-styled world’s leading nation is a laughing stock on the global stage — a hugely dangerous one with nukes and other WMDs it used before and may again.

He “repeatedly los(t) his train of thought…forgetting questions (asked) and relying heavily on cue cards from a binder he brought along.”

Asked about the state of US infrastructure, he said it ranks 85th in the world.

After checking cheat sheet notes, he corrected himself, saying the US ranks 13th globally.

NY Post editors called his first presser “a trip into an alternate reality.”

“In fact after fact, his statements were either grossly misleading or downright false.”

“New photos reveal several cheat sheets used by” Biden…including one with the headshots and names of reporters he planned to call on.”

He “only took questions from a list of journalists whose names and outlets he read from a cue card.”

“A photo of the card shows circled numbers around select reporters.”

At the end of the presser charade, he said “but folks, I’m going” — exiting without permitting one or more follow-up questions.

“Right out of the gate, the White House press corps” showed support for Joe Biden.

“Would have been nice if they would have routinely shown that level of respect for” Trump.

He’s acting as “prime minister of the Pelosi-Schumer” regime.

Fox News slammed Thursday’s charade, saying “(i)f Joe Biden is not capable of doing the job, he shouldn’t be in the job.”

“Is it (Kamala) Harris? Is it chief of staff Ron Klain? Is it Schumer? Is it Pelosi?”

“Is it Barack Obama? Is it Susan Rice?”

“Because it’s certainly not the frail, the weak, and the cognitively struggling guy we all witnessed today.”

An early March Rasmussen poll found that around half of Americans don’t think Biden is physically or mentally capable of conducting affairs of state.

Dana Carvey’s Biden is A+. He’s so cool. pic.twitter.com/0f0gmYC85Y

Given his deteriorated state, he’s likely unaware of what’s being done by others in his name.

EVENT: “The Quest for Open Science”