For weeks ahead of the election, Joe Biden kept hammering Trump’s response to the covid pandemic without explicitly stating what or how he would do differently, besides “urging” Americans to wear masks (which is what California has been diligently doing even as the state now boasts the highest number of cases in the nation) and to “listen to scientists.” Today, for the first time, the president elect laid out in specific terms what will would do to eradicate the covid plague and how he plans to speed up the vaccine rollout.

Addressing the nation near his home in Wilmington, Delaware, Biden said he would order increased production of syringes and other supplies to ramp up vaccinations against COVID-19 and improve upon the Trump administration rollout that he has called a “dismal failure.”

Trump had aimed to give vaccine doses to 20 million Americans by the end of 2020. But only 11.1 million coronavirus shots had been administered as of Thursday out of more than 30 million doses distributed to states, amid widespread distrust and roughly 40% of the population refusing to get vaccinates. 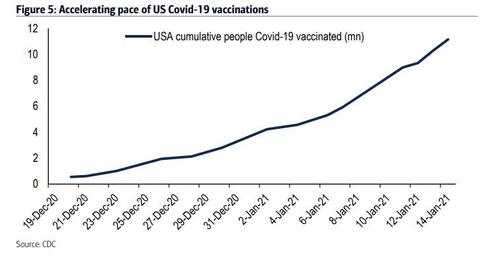 Biden promised to do better and to get 100 million vaccine shots into the arms of Americans during his first 100 days in office.  Federal officials have largely left states to manage distribution, resulting in big differences in vaccination rates. The Trump administration has said it expects 1 million shots to be delivered per day by the end of next week.

“This is a time to set big goals and pursue them with courage and conviction because the health of the nation is literally at stake,” Biden said.

Biden said he will instruct FEMA would to begin setting up community vaccination sites on his first day in office, in locations like gymnasiums, sports stadiums and community centers, where retired doctors would administer shots to teachers, grocery store workers, people over 65 years old and other groups who do not currently qualify.

“Mobile clinics moving from community to community” will partner will local health-care professionals to get vaccinations to “hard-to-reach” communities, he said.

According to a document released by his transition team, Biden would invoke the Defense Production Act to increase production of equipment needed to distribute the vaccines, such as glass vials, needles and syringes. He would also use the law to support vaccine refrigeration and storage. States that use their National Guard in the effort would be reimbursed by the federal government.

As part of Biden’s “aggressive” plan to defeat covid, he called on all Americans to wear masks in public for 100 days to combat the spread of the coronavirus, saying it was “stupid” that face coverings had become a political issue.

“This is a patriotic act,” Biden said in a speech in Wilmington, Delaware, on Friday outlining his plan to accelerate vaccinations against the virus. “We’re asking you, we’re in a war with this virus.” Biden also criticized Republican lawmakers who have refused to wear masks. “What the hell is the matter with them? It’s time to grow up.”

“For God’s sake, wear a mask – if not for yourself, for your loved ones, for your country,” Biden said, despite a recent Danish study which found that masks provide the wearer with only limited protection against COVID-19 infection. That study, conducted in April and May in which 6,024 adults were divided into two groups, found that after one month, 1.8% of the people wearing masks had been infected, while 2.1% of the people in the control group had tested positive.

Biden also called for increasing vaccine distribution in lower-income neighborhoods not currently well served by public health hospitals and pharmacies. Biden also plans a marketing campaign to encourage those skeptical of the vaccine to get inoculated.

“The vaccine rollout in the United States has been a dismal failure so far,” he said. Five changes, he said, will help the U.S. meet his goal of 100 million doses in his first 100 days.

“You have my word: we will manage the hell out of this operation,” he said. It was unclear who the “we” is though we suspect he means the Federal government, which explains just how “hellishly” this operation will be managed.

That said, and similar to his pre-election promises, Biden’s pledges remain vague about timelines, reinforcing Biden’s previous warnings that there’ll be no quick fix.

“We didn’t get into all of this overnight. And we won’t get out of it overnight, either,” Biden said. “We remain in a very dark winter.”

According to an announcement Friday by his transition office, Biden would encourage states to abandon a complex series of priority groups that’s been used to triage vaccination and instead focus on giving shots to front-line essential workers and anyone over 65.  He plans to set up community vaccination centers and mobile clinics and “jump-start” an effort to make shots available at pharmacies.

And so once again, the scientists – who originally urged a priority group rollout – were proven wrong.

Implementation of priority groups was driven by science but “has been too rigid and confusing,” Biden said. “There are tens of millions of doses of vaccine sitting around unused in freezers across the country” while people who want vaccinations can’t get them, he said.

“I’ve already asked the team and we’ve identified the suppliers who are prepared to work with our teams,” he said. Needless to say, companies like Pfizer which stand to make billions, were delighted: Pfizer CEO said he is “ready and able to support this plan” adding that “we are particularly aligned with the ideas of federally assisted vaccination centers, financial support to the States, mobile clinics to reach underserved urban areas and rural communities, vaccine availability in pharmacies and qualified health centers and an expanded public health workforce.”

Biden’s fourth change is a previously announced plan to release more first doses of vaccines and hold less in reserve for second doses. The Trump administration announced it would make that change itself this week. Biden said his administration would not change recommended dosing schedules that call for people to receive a booster shot three or four weeks after their first dose.

His fifth change, he said, will be more transparency for the vaccine program, including regular updates on progress toward vaccinating the population.

Earlier in the day, his transition team said he will reorganize the vaccine distribution team currently called “Operation Warp Speed” and has asked former Food and Drug Administration chief David Kessler to work with manufacturers to boost vaccine availability. On Thursday evening, Biden unveiled a $1.9 trillion stimulus plan on Thursday that includes $20 billion for vaccine distribution as well as $50 billion for coronavirus testing, which experts and officials said should help speed the process up. 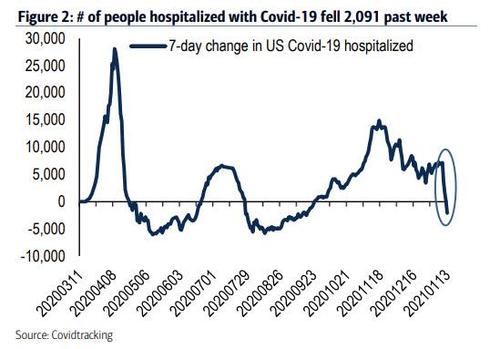 … and as Bank of America predicted that, absent a major spread of a mutant variant, the vaccinations should bring the virus under control in just a few weeks.

A video of Biden laying out his plan is below.

The Destructive Force And Failure Of QE