President Joe Biden’s plan to reopen schools in his first 100 days is about to hit a major snag; overwhelmingly liberal educators who are terrified of catching COVID-19 are refusing to return to work, and their unions feel the same way. 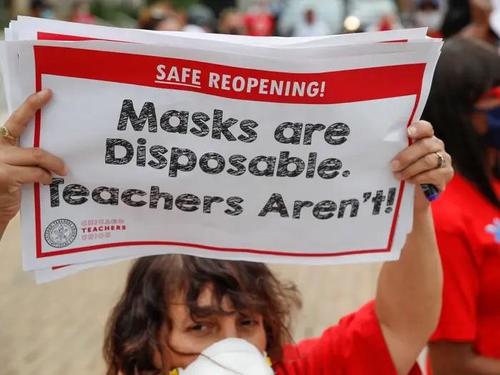 In Chicago, the nation’s third-largest school district has until Saturday to vote on a collective union action on whether to effectively go on strike and refuse to return to classrooms on Monday – and would instead continuing to reach remotely. Over 80% of Chicago Teachers Union delegates support the resolution against the district’s reopening plan, which requires elementary school teachers to begin working in person Monday for the first time since March. Approximately 70,000 students in kindergarten through eighth grade are preparing to return to school, while the union estimates around 10,000 educators are affected.

If the school district starts locking out staff who refuse to teach in-person classes, as they already have, the resolution authorizes a strike until a deal can be reached. That means all CPS staff, including high school teachers who have not been called back yet, would not log into their virtual classroom.

“Our members are resolved to continue working, teaching their students and doing so safely,” CTU President Sharkey said in a statement. “Only the mayor can force a strike, and if it comes to that, that’s her choice. We choose safety.” –WBEZ

After nearly a full academic year without students receiving in-person learning drawn out by CTU’s threats of illegal strikes — on top of 11 missed days of school in 2019 — it has become clear that kids are collateral damage for the union’s political and financial leverage. CPS leadership should hold fast in the face of these threats because they are illegal. Parents, meanwhile, need to let CTU know that they refuse to let their kids become victims to CTU’s unlawful tactics. -Jeffrey Schwab, via the Chicago Tribune

Elsewhere, teachers and their unions are questioning the overall plan, or lack thereof.

“Here you have the most lethal health emergency that we’ve had in 100 years, and there is so little guidance that everyone is doing different things,” said Randi Weingarten, president of the American Federation of Teachers, who added that a national strategy “costs money, it requires good management, and it requires working together.” 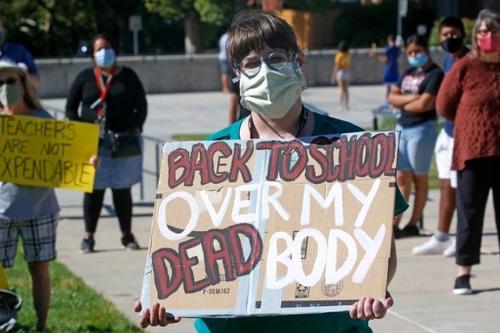 Biden is asking Congress for at least $130 billion in dedicated funding towards disaster reimbursement and reopening, and has directed the departments of Education and Health and Human Services to provide guidance on reopening.

Approximately 43% of US students are in virtual-only school, while over 1/3 haven’t set foot in a classroom since the beginning of the pandemic, according to data aggregation service, Burbio.

Michael Mulgrew, president of the city’s United Federation of Teachers, said his 130,000 members must be able to get vaccines, or else the largest U.S. school system shouldn’t fully reopen in September.

“Increased availability of the vaccine is the key to fully reopening everything, from schools to businesses,” Mulgrew said in an email Thursday. “We’ve been through too much — as a school system and as a city — to further risk the health of our students, their families, and our staff.” –Bloomberg

New York’s United Federation of Teachers agreed to reopen after the city instituted random weekly tests of 20% of all school building occupants – and found that the infection rate in schools had been below 1% for months. It was 0.49% on Wednesday. Out of 3,885 tests across 68 schools on Wednesday, nobody tested positive for COVID-19.

According to the report, “Recent research suggests reopenings aren’t risky when hospitalizations are low, but a lack of reliable testing and contact tracing in the U.S. prevents a definitive answer.”

Here’s How The FBI Tracked Down Ghislaine Maxwell