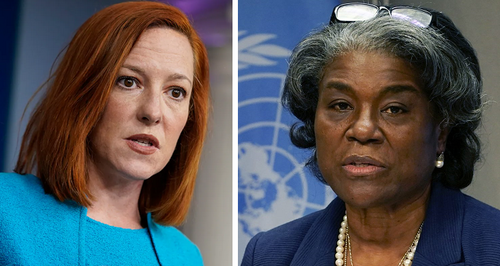 In a virtual speech during the liberal National Action Network’s 2021 convention, Greenfield addressed the US effort to rejoin the UN Human Rights Council – saying that the country needs to approach “issues of equity and justice” internationally “with humility” because America has a racist past.

“We have to acknowledge that we are an imperfect union and have been since the beginning,” she said, adding “I’ve seen for myself how the original sin of slavery weaved White supremacy into our founding documents and principles.”

Biden’s UN ambassador, Linda Thomas-Greenfield, tells the National Action Network that if America’s going to join the UN’s Human Rights Council, we must acknowledge our own failures: “White supremacy is weaved into our founding documents and principles” pic.twitter.com/bYc5SyWkE1

Instead of condemning the comments, Psaki doubled down when a reporter noted that Greenfield’s comments are ‘essentially parroting Chinese Communist Party (CCP) talking points – saying that while she has not seen Thomas-Greenfield’s comments, “there’s no question that there has been a history of institutional racism in this country and that doesn’t require the U.N. ambassador to confirm that.“

“Is the president going to remove an African American woman with decades of experience in the foreign service who’s widely respected around the world from her position as ambassador to the U.N.?” said Psaki earlier, twisting the reporter’s question into an assault on her identity. “He is not.”

We can’t seem to recall any modern examples of a country’s sitting representatives essentially trying to cancel its founding fathers, but there’s always a first.

Greenfield’s comments drew widespread criticism from conservatives, who saw them as drawing a false moral equivalency between the United States and other nations that are active human rights abusers. Some of those nations now lead the U.N. Human Rights Council. -Fox News

As National Review columnist Isaac Schorr notes, “There’s nothing wrong with acknowledging that America is an imperfect union — self-evident though it is,” adding “”[S]he failed to distinguish between the progress we’ve made and the horrific regression that’s easily observable in China, America’s chief geopolitical rival. Comparing the U.S.’s failure to wholly rid itself of bigotry to the genocide being prosecuted in China is both morally obtuse and strategically ill-advised.”

Meanwhile in Saudi Arabia – which sat for two terms on the UN human rights council – there’s modern slavery happening right now. And need we mention Uyghur-enslaving China? An active member of the Human Rights council whose term expires in 2023.

71% Of Americans Believe ‘We Are Not Alone’ In The Universe

“What Were You Thinking?” – Price-To-Sales Rocketship ‘To The Moon’