Biden Spox Suspended Without Pay After Threatening To “Destroy” Reporter

Biden Deputy press secretary TJ Ducklo, famous for having an on-air meltdown during the election over a teleprompter question, has been placed on a one-week suspension without pay after he threatened to “destroy” a Politico reporter working on a story about Ducklo’s previously undisclosed relationship with Axios political reporter, Alexi McCammond – who covered the Biden campaign. 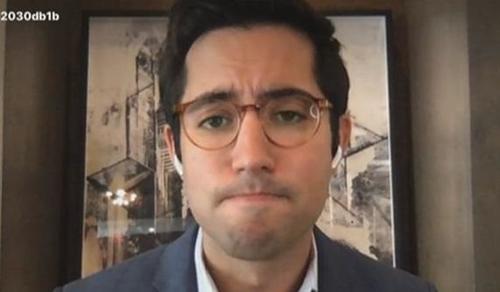 As Vanity Fair reported on Friday, Ducklo lashed out at a Politico reporter who was working on a story about his relationship with McCammond – except, instead of contacting the male reporter who reached out to him for comment, Ducklo instead called and threatened a female co-author – Politico‘s Tara Palmieri, in what Vanity Fair describes as sexual harassment.

“I will destroy you,” said Ducklo, according to the report – adding that he would ruin her reputation if she published it.

During the off-the-record call, Ducklo made derogatory and misogynistic comments, accusing Palmeri of only reporting on his relationship—which, due to the ethics questions that factor into the relationship between a journalist and White House official, falls under the purview of her reporting beat—because she was “jealous” that an unidentified man in the past had “wanted to fuck” McCammond “and not you.” Ducklo also accused Palmeri of being “jealous” of his relationship with McCammond. (Palmeri had no prior relationship or communication with McCammond before calling her to report on the Playbook item, which was a story that she was assigned and had not independently pursued.) –Vanity Fair

As an aside, this is exactly the type of behavior President Biden promised to fire people “on the spot” for.

“I’m not joking when I say this, if you ever work with me and I hear you treat another colleague with disrespect, talk down to someone, I promise I will fire you on the spot.

Apparently threatening to ‘destroy’ a journalist doesn’t ‘meet their standard’ for firing.

WH Press Sec. Jen Psaki when asked about Biden’s “fire you on the spot” promise with regards to the TJ Ducklo situation: “It doesn’t meet our standard. It doesn’t meet the president’s standard.” pic.twitter.com/oztJCHXn4o

Of course, the White House issued an apology and all is better now. Ducklo won’t be “assigned to work with any reporters at Politico” when he’s back from his one-week slap on the wrist.

Instead @PressSec tried to cover up her deputy sexually harassing a female reporter https://t.co/GGOHWYRs66

Following the incident, an editor at Politico reached out to the White House about the threats – which led to multiple conversations with White House officials on January 21, “including White House Press Secretary Jen Psaki, White House Communications director Kate Bedingfield, and Anita Dunn, director of West Wing operations.”

In one of those calls, senior White House officials acknowledged that Ducklo’s handling of the call with Palmeri was inappropriate and said he would send a note to her apologizing for the comments. In another conversation, the same White House officials took aim at Palmeri by accusing her of breaking an off the record agreement with Ducklo and pressing Politico as to why the contents of the call had been revealed. Palmeri had only informed her editors of the contents of the call, which she had transcribed into her notes as it was happening, after they asked her about it. –Vanity Fair

A Market Crash and High Inflation?