President Biden is about to introduce two separate components of what is expected to be a $3 trillion infrastructure plan, White House Press Secretary Jen Psaki told Fox News on Sunday.

The first part of the “Build Back Better” plan – which Biden will float on Wednesday – is expected to focus on rebuilding ‘roads and railways,’ while the second part which will be released “in just a couple of weeks” will focus on “social infrastructure” funding, including childcare and healthcare. 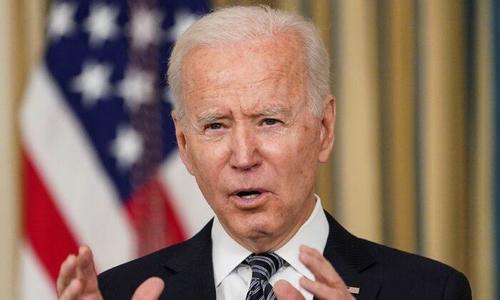 On Monday, the New York Times reported that Biden advisers recommended splitting the $3 trillion plan into two components, which may make it easier to gain much-needed GOP support given Democrats’ narrow majorities in both chambers of Congress. The Times also reports that $1 trillion may be devoted largely to ‘building and repairing physical infrastructure’ with an emphasis on climate change.

The second component of the $3 trillion plan would include proposals such as free community college and universal prekindergarten, and will “will address a lot of issues that American people are struggling with,” according to Psaki (via CNBC).

Talk of Biden’s next big push on the economy comes just weeks after the president signed a $1.9 trillion Covid-19 relief bill, which included funding for vaccine distribution as well as stimulus payments for most Americans.

The coronavirus legislation was passed without any Republican support via a special congressional mechanism known as budget reconciliation. The nearly-$2 trillion package was funded by federal borrowing.

The White House hasn’t said whether it will use reconciliation to pass legislation related to its infrastructure agenda, though it seems likely that separating the two parts of the plan is aimed at avoiding the streamlined process for at least one bill. -CNBC

Meanwhile, Psaki warned that Biden’s plan may require tax increases – though she declined to elaborate.

“The total package we’re still working out, but he’s going to introduce some ways to pay for that, and he’s eager to hear ideas from both parties as well,” she said.

And moderate Democrats aren’t so sure about that.

According to Axios, at least two moderate Democratic Senators required to pass a GOP-opposed tax hike, Joe Manchin (WV) and Kyrsten Sinema (AZ), are already pushing back against some of the tax hikes needed to pay for the infrastructure package and other measures. In the House, Speaker Nancy Pelosi (D-CA) can lose just three Democratic votes if Republicans are unified in their opposition.

Moderate House Democrat Scott Peters (CA) says he’s fine with a smaller corporate tax hike of less than Biden’s 28%, saying he thinks “Republicans overshot” when Trump lowered the corporate tax rate from 35% to 21%. “I think that 25% is fine,” said Peters, adding “It doesn’t disadvantage our companies, and in turn our employees, workers…I think 25% is the right spot.“

In a statement to Axios, Psaki said “We know there will be a range of views on how we get there, but we look forward to working with a broad coalition of members on the critical priorities of the president’s plan: creating good jobs and making America more competitive — paid for without any tax increase on people making less than $400,000 a year.”

Of course, for those paying attention – that’s $400,000 year combined, meaning individuals making over $200,000 per year could also be hit with increases.

“A Fantastically Unusual Thing Happened”: For The First Time Ever, IB Clients Are Net Short The Market