Biden is expected to roll out with sanctions this week penalizing Putin’s government for the alleged poisoning of Kremlin opposition leader Alexey Navalny. CNN cited two admin officials to say it will “happen in coordination with the European Union” but is still being “fleshed out by US and EU officials in the coming days.”

The officials said it’s part of Biden seeking to send a “strong message” to Russia as well as China and others that they can’t violate human rights with impunity. 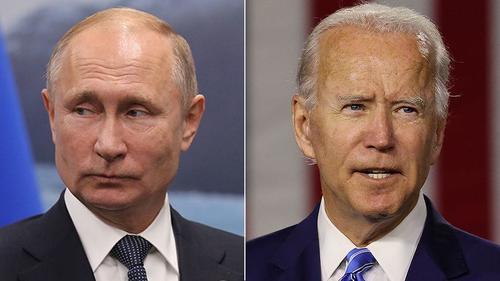 Last month cities across Russia were hit by large, well organized and closely reported mass demonstrations in support of the jailed Kremlin critic, recently sentenced to 2.5 years in prison on a prior probation violation.

Currently all “options” for sanctioning Russia are said to still be under review ahead of the impending announcement, which can include the following:

The package proposed three types of sanctions: Magnitsky Act sanctions on the individuals who detained Navalny; sanctions under the Chemical and Biological Weapons Control and Warfare Elimination Act of 1991 (CBW Act); and sanctions under Executive Order 13382 — which is “aimed at freezing the assets of proliferators of weapons of mass destruction and their supporters,” according to the State Department.

And further according to the latest CNN reporting, “One option being discussed is an executive order focused on Russia which would trigger sanctions on the country for multiple assaults on US democracy and American personnel — including the SolarWinds hack and the bounties put on US soldiers in Afghanistan — in one package, one official explained.”

White House press secretary Jen Psaki previously said that Biden’s “intention was also to make clear that the United States will act firmly in defense of our national interests in response to malign actions by Russia.”

Both the administration and the media are also now hyping that Biden’s “tough” stance on Russia stands in contrast to Trump’s handling of Moscow – despite the fact that Trump controversially ended cooperation on things like landmark arms control agreements, and further opened up Washington’s ability and that of US companies to send arms to Ukraine.

DC National Guard May Carry Firearms Ahead Of Inauguration: Report