Among US-manufactured items seen as vital across multiple industries which increasingly came up in short supply as demand increased faster than expected amid the coronavirus pandemic have been semiconductor chips and large-capacity batteries for electric vehicles.

The chip shortage has most immediately and severely hit US automakers to the point of having to in many cases halt production and furlough workers amid the supply bottleneck. “The supply disruptions threaten to harm U.S. economic growth and could lead to layoffs, prompting concern from the White House as Biden seeks to rebuild an economy battered by the coronavirus,” Bloomberg writes.

On Wednesday President Biden will sign an executive order which seeks to address the global semiconductor chip shortage after a session with a bipartisan group of lawmakers to discuss the growing crisis. “Make no mistake, we’re not simply planning to order up reports. We are planning to take actions to close gaps as we identify them,” an administration official said.

Reuters cites alarming numbers out of Ford Motor Co which said recently that “a lack of chips could cut the company’s production by up to 20% in the first quarter while General Motors said it was forced to cut output at factories in the United States, Canada and Mexico and would reassess its production plans in mid-March.”

The crisis at home also comes as China is chasing its own semiconductor self-sufficiency and as Republicans pressure the Biden White House to act to protect pandemic-slowed American supply chains. The slowed supply in the US is also hurting smartphone companies.

“U.S. semiconductor firms account for 47% of global chip sales but only 12% of production, because they have outsourced much of the manufacturing overseas, according to the Semiconductor Industry Association,” Reuters underscores. “In 1990, the U.S. accounted for 37% of global semiconductor production.” 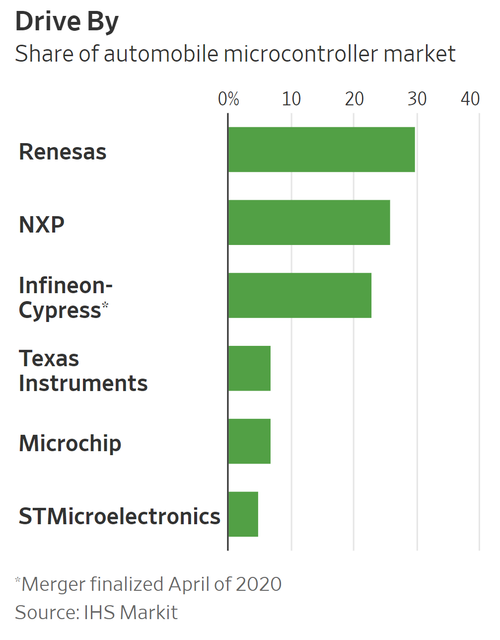 Via The Wall Street Journal/IHS Market

Part of the problem, as WSJ recently reviewed, is the immense cost, space and construction it takes to set up a chip fabrication plant which usually “take more than two years to set up and the soaring cost of building and equipping them has led more semiconductor companies to outsource more of their production needs. As examples, WSJ notes that “Renesas, NXP and Infineon -Cypress, which together account for nearly 80% of the automotive chip market, all use TSMC for some of their manufacturing. The Taiwanese firm now produces about 70% of the microcontroller units used in the world’s automobiles, estimates Phil Amsrud of IHS Markit.”

The new executive order, expected to be signed late in the afternoon, will initiate an immediate 100-day review of supply chains for the following products deemed vital to US industrial development and the defense sector: semiconductor chips, large-capacity batteries for electric vehicles, rare earth minerals and pharmaceuticals.