It was only a week-and-a-half ago that President Joe Biden agreed in an ABC interview that Vladimir Putin is a “killer” and that the Russian leader “doesn’t have a soul”.

Perhaps Biden forgot his own assessment?… Perhaps another “senior moment”? After all, what person in their right mind would invite someone they believe to be a killer or murderer to a cooperative summit where there will be plenty of rubbing elbows and hoped-for close coordination?

So there it is – “killer” Putin is indeed confirmed to have been invited, according to a White House statement.

“President Joe Biden on Friday said that Vladimir Putin of Russia and Xi Jinping of China are invited to the global leaders’ climate summit the administration is hosting in April,” CNBC reports of the statement.

The major climate meeting is scheduled to run April 22 through 23 and will be held remotely, so perhaps at least Biden doesn’t have to be in the same physical room with “killer” Putin.

But then Biden attempted to inject just a slight amount of distance over the personal invitation to the man he believes to be a “killer”:

The president told reporters that he hasn’t directly invited Putin or Xi but said the leaders “know they’re invited” to the summit, an event the U.S. is hosting to advance global efforts to reduce climate-changing fossil fuel emissions.

The White House later published a list of 40 world leaders invited to the summit, including Xi and Putin.

The White House said it’s all about taking global action to cut carbon emissions, thus the need to invite some of the world’s “top climate-change sufferers, do-gooders and backsliders” — as the Associated Press had eloquently put it. 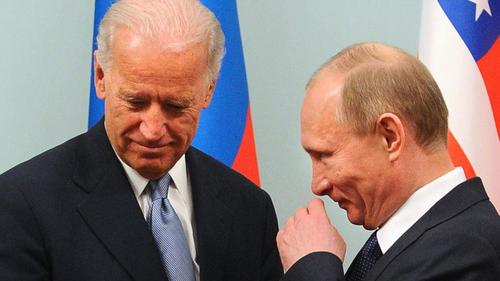 It remains unclear if either Russia or China will accept the invitation.

President Xi’s presence could also be awkward, given during Biden’s first-ever presidential press conference days ago he noted China’s leader “doesn’t have a democratic bone in his body” after previously calling him an “autocrat”.

Still waiting for that debate…

NEW: Russian Pres. Vladimir Putin has reacted to Pres. Joe Biden calling him a “killer” by challenging Biden to take part in a conversation with him broadcast live online. https://t.co/8MCcu3y2u5

The US and China rival sides have accused the other of being the globe’s “worst polluter” in recent years.

And judging by how the tumultuous Alaska summit went, the upcoming climate conference could be yet another venue and opportunity for more finger-pointing and insult-hurling between Beijing and Washington.

Why People Outsource Their Thinking to “The Experts”