Expect the S&P 500 to continue rallying in 2021, but it won’t be anything like the run it had from March through year-end. The question is whether the economic recovery will be sturdy enough to support a rotation into riskier assets – or will investors simply return to the familiarity of tech stocks? 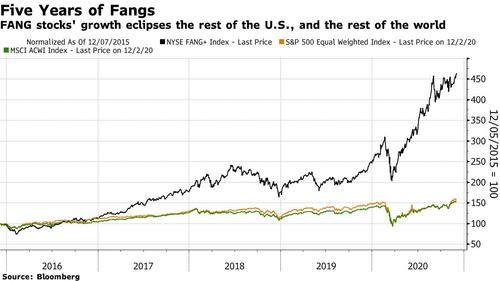 Conditions are ripe for the stock market to keep running on the reflation trade: a vaccine rollout, fresh fiscal stimulus, dollar weakness, easy financial conditions and a reasonably robust consumer. The year-end move that featured value over growth, and small caps over tech, can continue.

However, momentum is likely to slow. Traders remain sensitive to the impact of the pandemic — the recent surge in cases is already curbing the U.S. recovery, and delays in distributing Covid-19 vaccines could be a key indicator for global asset prices.

Rising retail sales and falling jobless claims will be essential in assessing the strength of the rebound in a consumer-driven economy.

An elevated savings rate is keeping cash largely on the sidelines, which is a major hindrance until it’s unleashed.

Regardless of what happens, some slowing is inevitable after the S&P 500’s more than 16% rally in 2020, which featured a 68% surge from its March trough. Markets Live readers who responded to the annual MLIV survey expect the index to rise less than 1% in 2021 to 3,770. Strategists are more bullish, with an average of 4,035.

A weakening dollar could be a major tailwind, incentivizing investors who missed out on the 2020 rally to buy into a fairly expensive U.S. stock market.

By mid-year, valuations and earnings should become part of the story again as the pandemic hopefully recedes and the economy bounces back. The S&P 500 is carrying a 12-month forward P/E that it hasn’t seen since the dot-com era, with expectations for 28% profit growth in 2021 compared with a 17% decline in 2020, according to Bloomberg Intelligence.

Results in the second and third quarters could be crucial. If the market’s lofty goals aren’t met, it could spur a selloff, particularly in sectors that benefited from the reflation rally, such as travel and energy.

If the recovery stalls by mid-year, investors may be willing to pay up again for defensive stocks like tech. Watch for an implosion in assets inflated by the re-opening trade if growth isn’t surging and inflation remains muted mid-year.

The possibility of Fed tightening remains a risk. Frothy risk assets leave investors vulnerable to an end of easy monetary policy. Any hints of that could cause a surprise selloff similar to the 2013 taper tantrum or the declines in late 2018, which only calmed after a speech by Fed Chair Jerome Powell in early January 2019.

Tech’s antitrust scrutiny, once part of the “Blue Wave” trade, will remain a sideshow. The idea has bipartisan support that could lead to speedy Congressional action. But individual stocks have historically responded to court cases, which are typically long and drawn out affairs. That will matter more to the S&P 500 given the weightings of these companies.

Retail trading, a hallmark of 2020, could lead to enthusiasm for individual stocks. But it won’t mean as much to macro investors until those names filter into the billions of dollars in passive investments in indexes. Tesla’s 2021 performance will offer guidance for that.

The S&P 500 is poised to have another up year, albeit one that isn’t as tumultuous as 2020. What investors need to determine is whether the gains will tilt to cyclical or defensive stocks.

IN ONE CLICK — You Can Contact VP Pence, Senators, Representatives and All Swing State Legislatures and Request a Forensic Audit of Swing State Results – TRY IT NOW!

Americans Are Being Divided As The War On Domestic Terror Expands