Entering 2021, one of the top consensus trades was to be short the dollar because it was common knowledge that the Fed would be injecting liquidity as far as the eye can see, far beyond the ability of any other central bank to match it, while covid still remained a looming threat to the economy. However just a few months later, with over 3 million Americans vaccinated daily putting covid in the rearview mirror and amid a burst of volatility and rising inflation expectations which sent both rate and risk vol surging… 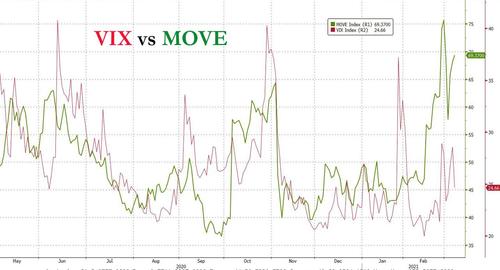 … being short the USD became a risky proposition, especially in the aftermath of the massive running short squeezes across various assets, from low-float meme stocks such as GME to silver which threatened to hammer shorts in what was one of the biggest consensus shorts in the world.

Silver exploded as millions of retail investors chased a squeeze.

Now, will they also try to force a dollar squeeze which is much more shorted (and whose surge will crush PMs) pic.twitter.com/nBc8T4PmMF

So perhaps it was the recent surge in the dollar, or perhaps it was just fear of continued market turmoil, but whatever the reason, In the week ending March 16, the squeeze in the dollar accelerated and non-commercial traders purchased a net $10.3Bn USD,after purchasing $5.6Bn net in the USD in the week priod.

According to Goldman, this is the largest amount of net USD purchases over a week by non-commercial traders since June 2018, with leveraged funds driving the net purchases, turning net long USD while asset managers – who usually take the other side of non-commercial specs – extended Dollar shorts. 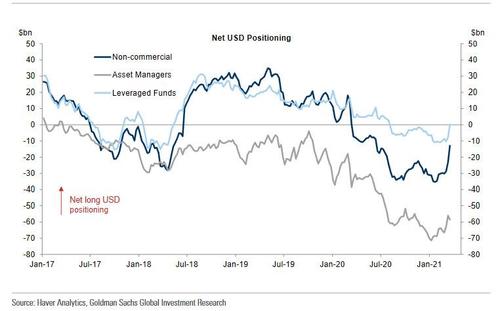 A separate analysis of the CFTC COT data by ANZ’s Khoon Goh finds an even more aggressive squeeze: he calculates that the dollar buying was worth US$7.2Bn in the past week, the most since August 2014.

Leveraged funds have turned overall net long #USD for the first time since July 2020. Big week of dollar buying worth US$7.2b, the most since August 2014. #DXY still struggling to break cleanly above 92. Let’s see how much hedge funds want to pile into the long dollar bet. pic.twitter.com/6yoJR4Dobb

And so, with the DXY still struggling to break cleanly above 92, it now appears that momentum has flipped for the USD and the question is now that the short side in the dollar has capitulated, “how much do hedge funds want to pile into the long dollar bet”, and just how badly will risk asset suffer if the USD surges from here.