Oh, how the mighty have fallen.

The once former “bond king” Bill Gross, who more recently has been known as one half of a grumpy neighbor dispute wherein Gross allegedly conducted a coordinated campaign of harassment intended to coerce his neighbors to drop a complaint involving a lawn statue, is back. And he has some less than hot takes on both GameStop and treasuries.

Apparently unaware that gloating about being short GameStop may not be the smartest strategy in today’s market, Gross said on Bloomberg TV Tuesday that he made “about $10 million” betting against GameStop shares.

“I got in too early. I was in the hole by about $10 million,” Gross recounted, telling Bloomberg he bet against shares using the options market. “I got in with options like a good Robinhood trader, I guess.”

Gross also appears to be pressing his bets against the company. “I’m still selling call options at $250 and $300. I think this is the perfect opportunity for options sellers, not buyers, to take advantage,” he said.

Gross also told Bloomberg he is expecting “3-4% inflation” and was short treasuries as a result. He is short the 10-year future and also commented that he is betting against the long bond “to a certain extent.”

Gross retired from his Janus Unconstrained Fund in February 2019 after spending years unable to generate consistent returns and stuffing his ex-wife’s air vents with dead fish. Gross had run the Janus Henderson Global Unconstrained Bond Fund since late 2014, however his annualized returns of less than 1% at Janus “failed to live up to his stellar long-term record from the Pimco era” as Bloomberg once diplomatically put it. 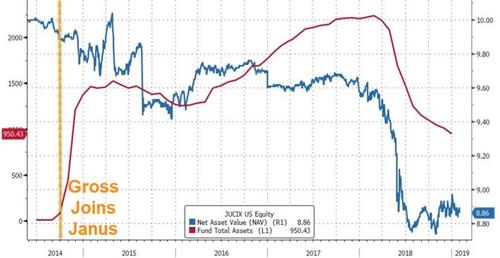 And as we noted on Twitter moments ago, WallStreetBets may be eager to offer him up a second retirement:

Texas says “no” to vaccine passports