Bitcoin Bounces Back Above $50K After Square, MicroStrategy Buying

Bitcoin has bounced back from its lows around $45,000 yesterday to over $50,000 this morning following reports from Square last night, and MicroStrategy this morning, of more corporate HODLing. 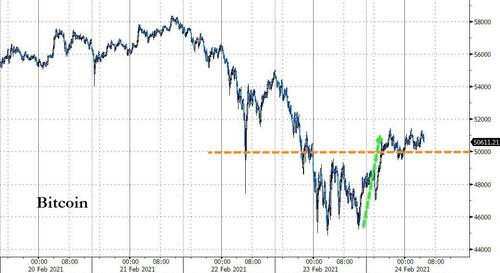 After reports that Square added $170 million of Bitcoin to its reserves, MicroStrategy today announced that it had purchased an additional approximately 19,452 bitcoins for approximately $1.026 billion in cash at an average price of approximately $52,765 per bitcoin.

“The company now holds over 90,000 bitcoins, reaffirming our belief that bitcoin, as the world’s most widely-adopted cryptocurrency, can serve as a dependable store of value. We will continue to pursue our strategy of acquiring bitcoin with excess cash and we may from time to time, subject to market conditions, issue debt or equity securities in capital raising transactions with the objective of using the proceeds to purchase additional bitcoin.”

“We believe our bitcoin strategy, including our bitcoin holdings and related activities in support of the bitcoin network, is complementary to our software business, by enhancing awareness of our brand and providing opportunities to secure new customers.”

Bitcoin also found support from the futures market where funding rates dropped substantially. Across major futures exchanges, including Binance, Bybit and Bitfinex, the funding rate of Bitcoin has dropped to 0.01%.

The Bitcoin futures funding rate was consistently above 0.1% throughout the entirety of the rally from the $40,000s to $58,000. When the futures funding rate is high, it means the market is overcrowded with buyers and the rally likely overextended. This creates a major risk of a long squeeze, which can cause the price of Bitcoin to drop quickly in a short period.

With the funding rate back to 0.01%, the risk of a long squeeze is significantly lower and if a new uptrend ensues, the rally could be more sustainable.

Additionally, Ark Investment Management founder, CEO and CIO Cathie Wood, who said that the retracement was a “healthy” sign given months of near-vertical upside.

Speaking to Bloomberg, she said that was “very positive on Bitcoin, very happy to see a healthy correction here.”