Among the challenges in regulating bitcoin will be the Biden administration’s handling of recent anti-money laundering laws put into place by the Trump administration pertaining to bitcoin and cryptocurrencies.

The rules, implemented at the last-minute by the Trump administration, seek requirements for financial services firms to report identities of cryptocurrency holders, according to Bloomberg. The point of the rules is to stop attempts to use crypto as a means of transferring money illicitly.

Lobbying against the regulations are “heavyweights from both K Street and Wall Street”, according to Bloomberg, including Fidelity and the U.S. Chamber of Commerce. The Chamber of Commerce has said the rule would have “unintended long-term consequences” on the virtual currency industry.

Also lobbying against the rule have been “Republican lawmakers, including former Representative Cynthia Lummis, who is now a Wyoming senator; Arkansas Senator Tom Cotton and Democratic Representative Tulsi Gabbard of Hawaii”. 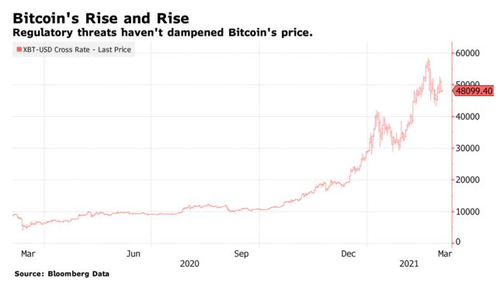 The rules were implemented by the Financial Crimes Enforcement Network or FinCEN, after President Trump lost the 2020 election. The move drew criticism and even the threat of lawsuits from pro-crypto trade groups. The rule would require filings to the Treasury every time a customer moves at least $10,000 worth of virtual currency into a wallet not hosted at an exchange. These are similar to the reports that banks already send under existing AML laws when customers take out $10,000 or more in cash.

The regulation would also require banks and exchanges to keep records of customers who send $3,000 or more of virtual currencies to someone else’s unhosted wallet.

Obviously, such regulation would maim one of bitcoin’s biggest “assets”: the ability to transfer money anonymously and “outside the system”. Should Treasury Secretary Janet Yellen move forward with the rules, crypto services could wind up becoming more expensive – and some cryptocurrencies could even disappear altogether.

Additionally, if the rules are adopted, they could cause a “sharp fall” in crypto prices, according to Bloomberg. Matthew Maley, chief market strategist for Miller Tabak & Co., said: “Bitcoin is very risky and very volatile and it’s going to continue to be that way. If you add something like a new regulation, it’s going to be very vulnerable to a correction.”

FinCEN published the rule December 18 and rushed through a 15 day comment period where more than 7,600 public comments were received.

As of today, there’s no timetable on when the Biden administration will decide on the rule.

Of course this is just the latest in “the death of bitcoin”-esque worries. In fact, as 99Bitcoins notes, Bitcoin has died 402 times since inception. 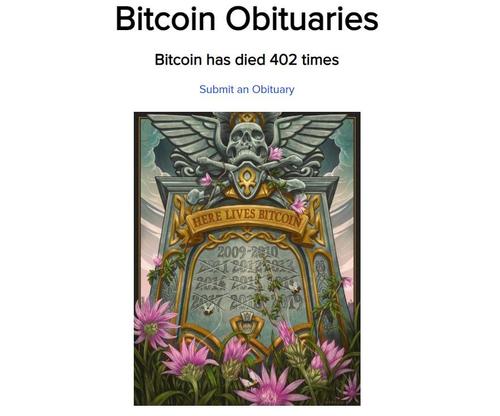 What Clarence Thomas Gets Wrong About Big Tech