After a monumental run over the new year holiday, the opening of Bitcoin futures trading sparked a major downdraft in cryptocurrencies overnight.

Futures crashed to fill the gap from Thursday’s close, before bouncing back hard… 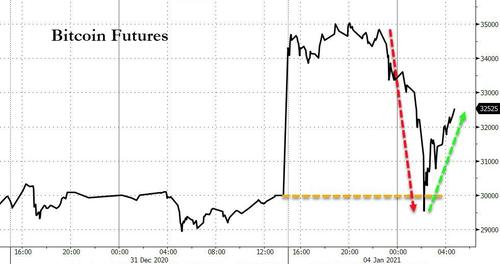 Spot Bitcoin collapsed alongside futs, dropping below $28k, but has ripped back above $31k since… 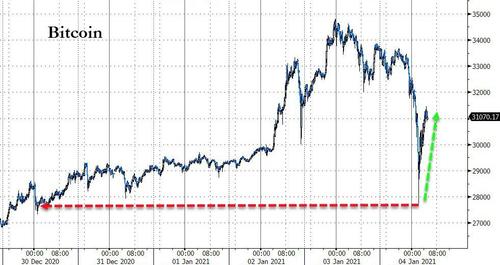 And overnight saw Ethereum scream higher to $1170 before plunging to below $900 and now ripping back higher, above $1000… 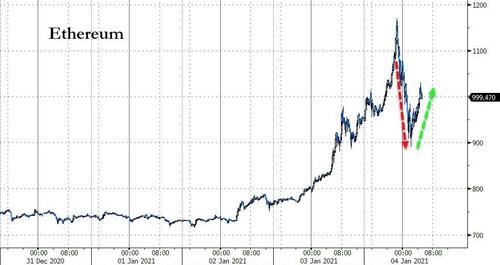 As Reuters reports, traders said bitcoin’s drop on Monday was not unusual for the volatile asset, whose wild price swings have in part prevented it from becoming widely used as a currency.

“For the most part, this looks like a purely technical move, signalled and caused by short-term euphoria,” he added.

Fuelling bitcoin’s rally has been the perception it can act as a hedge against the risk of inflation as governments and central banks turn on the stimulus taps to counter the economic impact of the COVID-19 pandemic.

In recent days, altcoins have dominated bitcoin and the BTC/ETH ration collapsed to its lowest (ETH relatively strongest) since Thanksgiving… 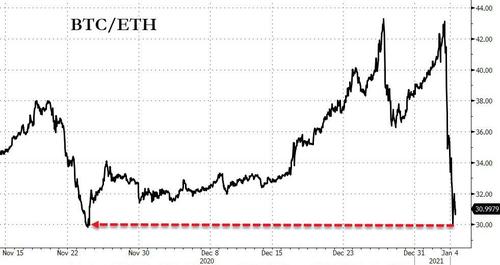 Additionally, @SkewDotCom notes that there is a very large position on the Jan21 36k calls, open nearly 18k bitcoin options or approximately $600mln notional. Most likely the largest pin in the young history of the bitcoin options market. 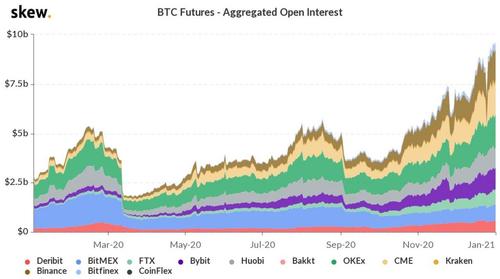 Meanwhile, as CoinTelegraph notes, it’s all change for the better among Bitcoin’s core fundamentals. After a month of small decreases, network difficulty is once again set to push upwards to hit new record highs. 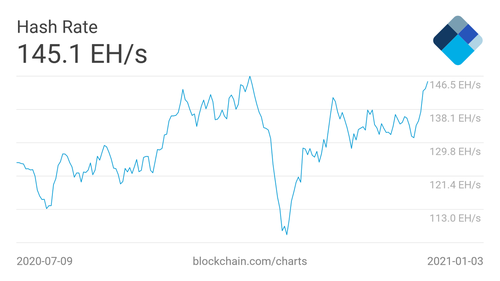 At the next automated readjustment later this week, difficulty is currently expected to increase by just over 5%.

The past two readjustments saw drops of 2.5% and 0.4% respectively, an interesting contrast to the rapid increases in spot price seen at the same time.

Difficulty is arguably Bitcoin’s most important technical aspect when it comes to its status as “hard” money, allowing the network essentially to govern itself and stay secure regardless of miner participation or price action.

Hash rate refers to the computing power dedicated to participating in the Bitcoin network, and current data suggests that participation and desire to keep the network secure is stronger than ever.