Bitcoin Explodes To All Time High After Tesla Buys $1.5 BIllion

In retrospect, it was not only inevitable but clearly obvious… at least to those who read us.

Back on January 9, when discussing the recent surge of institutional and corporate purchases of bitcoin and conversion of cash into the cryptocurrency, we said that it was just a matter of time before Elon Musk joined MicorStrategy and bought “several billion” in bitcoin. Specifically, in “How Bitcoin Hits $100,000 Next: Morgan Stanley Boosts Stake In Microstrategy, Opening The Floodgates” we said…

One such company which we are convinced will announce it is converting billions of its existing cash into bitcoin, is none other than Tesla, whose CEO Elon Musk was urged by MSTR CEO Saylor to make a similar move with Tesla’s money. And since Musk, already the world’s richest man thanks to the most aggressive financial engineering on the planet, has never been one to shy away from a challenge, we are absolutely confident that it is only a matter of time before Tesla announces that it has purchased a few billion bitcoin.

Our confidence was based on the following late-December exchange between Elon Musk and MSTR CEO Michael Saylor:

Are such large transactions even possible?

One month later, One River’s Eric Peters clearly agreed with our take and shortly after Elon Musk tweeted his appreciation of bitcoin, the clearest sign yet of what was coming…

…. said that “It’s possible Elon hasn’t yet bought his bitcoin, and pre-announced the intention, lifting the price ahead of his purchases. But sane people don’t do such things.”

Well, we were right, and so was Eric Peters just because moments ago, Tesla filed its 10K in which it quietly said that not only had it purchased $1.5BN in bitcoin (not the idiotic dogecoin that Musk had been pushing in his recent tweets) just as we predicted…

In January 2021, we updated our investment policy to provide us with more flexibility to further diversify and maximize returns on our cash that is not required to maintain adequate operating liquidity. As part of the policy, which was duly approved by the Audit Committee of our Board of Directors, we may invest a portion of such cash in certain alternative reserve assets including digital assets, gold bullion, gold exchange-traded funds and other assets as specified in the future. Thereafter, we invested an aggregate $1.50 billion in bitcoin under this policy and may acquire and hold digital assets from time to time or long-term. Moreover, we expect to begin accepting bitcoin as a form of payment for our products in the near future, subject to applicable laws and initially on a limited basis, which we may or may not liquidate upon receipt.

Digital assets are considered indefinite-lived intangible assets under applicable accounting rules. Accordingly, any decrease in their fair values below our carrying values for such assets at any time subsequent to their acquisition will require us to recognize impairment charges, whereas we may make no upward revisions for any market price increases until a sale. As we currently intend to hold these assets long-term, these charges may negatively impact our profitability in the periods in which such impairments occur even if the overall market values of these assets increase.

… but that it could use bitcoin “as a form of payment for our products.”

The news also helped push Tesla stock sharply higher, a move which it needed to preserve upward momentum, and reverse an earlier loss… 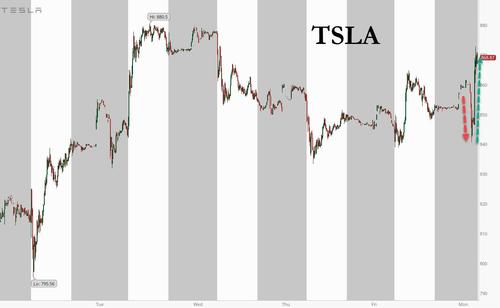 … after a report that China’s market regulator had undertaken meetings with Tesla regarding quality issues, sparking concerns about Tesla’s market share on the mainland.

More importantly, in kneejerk reaction bitcoin – and etherum, and all other cryptos – exploded higher, rising above $42,000 and hitting a new all time high… 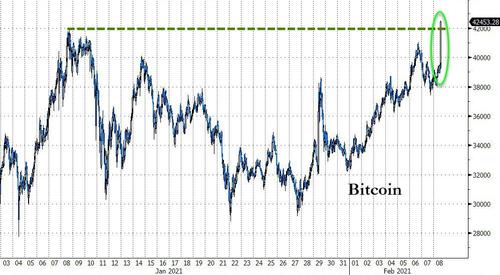 … which is just the start because now that Tesla has broken the seal – and seen its stock surge in response – expect every other company in the S&P to follow in Tesla’s stock-boosting footsteps and convert a little (or not so little) portion of its cash reserves into bitcoin, sparking Bitcoin’s next ramp higher to $100,000 and beyond.