Bitcoin has extended its recent gains overnight, back above $54k and at two-week highs as an ever-growing number of corporations add crypto to their reserves and Washington’s helicopter money drop is imminent… 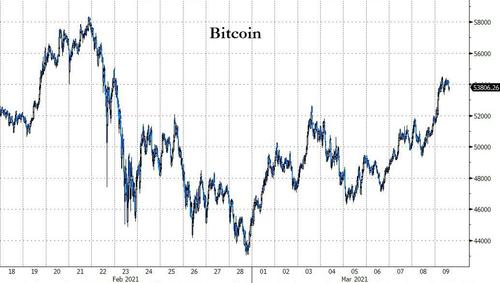 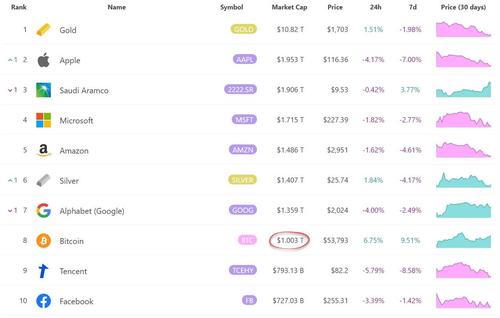 In an update on March 9, on-chain analytics service Material Indicators noted that buy orders of $100,000 and higher on Binance – the biggest cryptocurrency exchange by volume worldwide – are reaching all-time highs.

CoinTelegraph notes that in stark contrast to orders worth less than $100,000, larger buys are more frequent than ever before in Bitcoin’s history. Smaller allocations have plummeted in 2021, matching an existing narrative that institutions are scooping up liquidity on exchanges which surfaced during the recent bull run.

“The $100k – $1M class is now also about to make a new ATH,” Material Indicators commented on Twitter alongside a chart.

“Meaning, they bought the dip.” 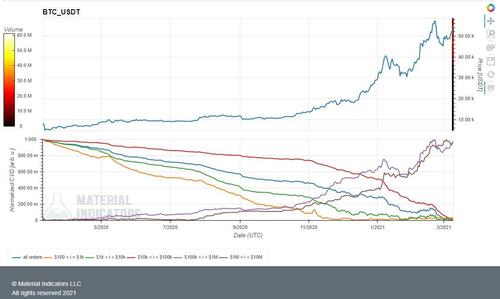 Ethereum has been storming higher since IEP-1559 approval… 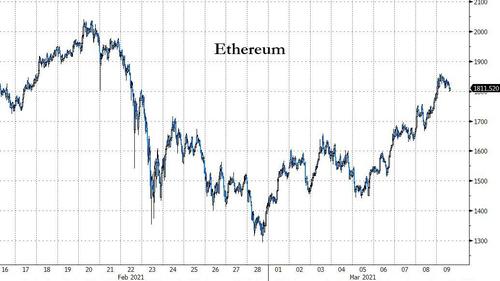 Additionally, CoinTelegraph reports that NFT-linked altcoins also got a bid. 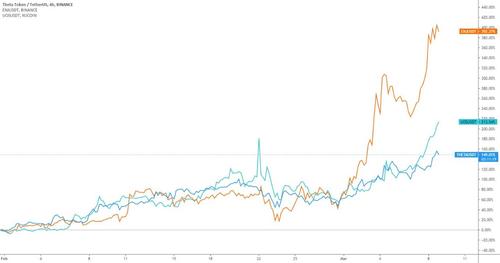 UOS price surged 21% to establish a record high of $0.452 as the excitement grows around the project’s mainnet launch which will enable cross-chain and NFT capabilities.

Theta, a blockchain-based video streaming platform, also reached a new all-time high of $4.98 in front of the long-awaited hard fork on March 10.

Theta performed strongly throughout February as the project was bolstered by the introduction of NFTs for streamers and an announced partnership that saw Sony Europe join the Theta blockchain validator program.

Enjin (ENJ) also broke out to a new all-time high of $1.76 on March 5 as the project’s focus on creating a wide-ranging NFT ecosystem is beginning to pay off.

‘Weekend At Biden’s?’ Handlers Shut Down Yet Another Q&A After Public Appearance