Shortly after the joke cryptocurrency DogeCoin soared 800% after Elon Musk tweeted the image of a dog which his followers interpreted as an endorsement of the farcical crypto, just around 420am ET, the world’s richest man singlehandedly pushed bitcoin up by 15%, boosting its market cap by around $80 billion, with a single tweet: “In retrospect, it was inevitable”

What is he referring to? The answer was to be found in his twitter bio which was changed to just one word: “#bitcoin” 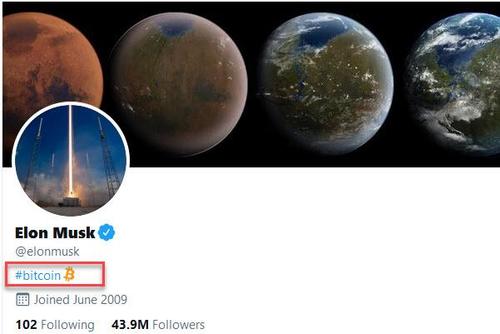 As a reminder, three weeks ago we predicted that Elon Musk would be instrumental in pushing bitcoin above $100,000 per token, when discussing the strategy of companies to convert existing cash to bitcoin, we said that “countless other publicly-traded firms will now rush to convert all their cash (and more) into bitcoin, while abandoning  existing operations in hopes of becoming bitcoin investment pools and having their shares similarly snapped up by whale investors such as Morgan Stanley. First Trust, JPMorgan, Alliance Bernstein, and all the other institutions which are currently long and adding to their Microstrategy holdings.”

One such company which we are convinced will announce it is converting billions of its existing cash into bitcoin, is none other than Tesla, whose CEO Elon Musk was urged by MSTR CEO Saylor to make a similar move with Tesla’s money. And since Musk, already the world’s richest man thanks to the most aggressive financial engineering on the planet, has never been one to shy away from a challenge, we are absolutely confident that it is only a matter of time before Tesla announces that it has purchased a few billion bitcoin.

Tonight’s tweet by Musk was only the first such step, one which we are certain will be followed by news in the coming days that Tesla has bought several billion in bitcoin, which will also help send TSLA stock above $1,000 in this meme-driven market. 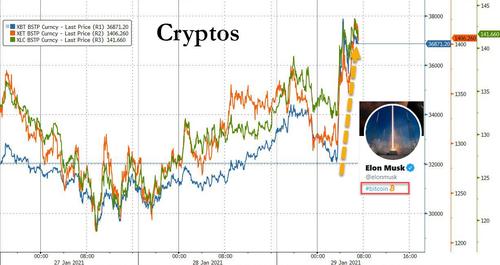 The Stock Market Is Broken, Now For All To See

GALLUP: From regulation and crime to energy and taxes, Americans are less satisfied on majority of measures