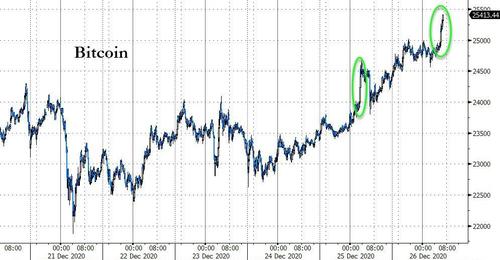 …topping $25,000 for the first time this morning, as the holidays do nothing to dampen demand for the leading cryptocurrency… 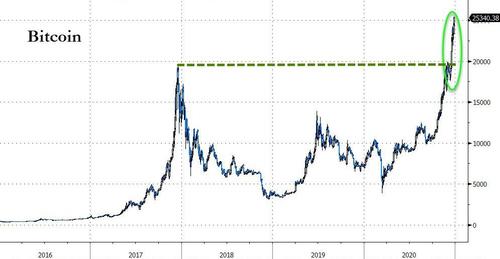 However, the love is not being shared across the rest of the crypto space with Ethereum now at its lowest relative to Bitcoin June… 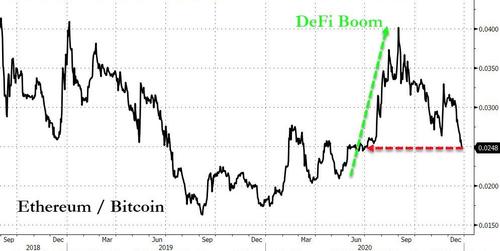 And as Bitcoin’s price rises, so does its total capitalization, which, as CoinTelegraph’s Joseph Young points out,  now exceeds the market cap of Visa at $460 billion… 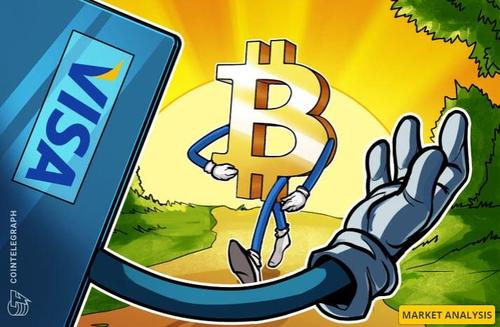 Visa, the financial services giant, is valued at $460.06 billion according to Yahoo Finance. As of Dec. 26, Bitcoin is comfortably hovering above $462 billion. 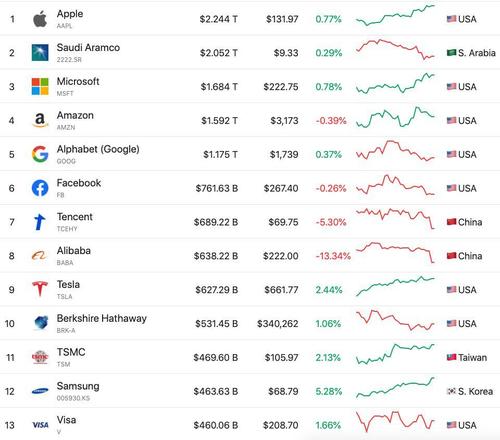 But is Visa and Bitcoin an apt comparison?

Bitcoin is essentially a peer-to-peer software protocol while Visa is a for-profit corporation. Some may argue that a direct comparison between the two is not apt as they are fundamentally different.

But Bitcoin surpassing the valuation of Visa is symbolic above all else and the current market cap of Bitcoin would theoretically make it the thirteenth-largest company in the world.

Meanwhile, throughout 2020, the institutional interest in Bitcoin has been surging. At a point where the institutional demand for Bitcoin continues to increase exponentially, the surpassing of Visa’s market cap could further boost the confidence around Bitcoin among institutions.

For instance, Wirex, the crypto Visa debit card issuer, became a principal member of Visa in Europe. Cuy Sheffield, the senior director and head of cryptocurrency at Visa, said:

“Digital currencies have the potential to extend the value of digital payments to a greater number of people and places. We’re excited to work with innovative Fintechs like Wirex and enable their customers to use digital currencies at more than 61 million merchants on the Visa network.”

On-chain data hints at where BTC is heading next

In the near term, traders and on-chain analysts say that Bitcoin’s trajectory remains optimistic.

Analysts at Intotheblock identified $23,069 and $23,377 as the key support levels for BTC in the near future. They wrote:

“Bitcoin has been able to sustain above $23,000. The IOMAP indicator supports that premise as is showing a strong level of support at the range between $23,069 and $23,377.1, where almost 900 thousand addresses previously acquired 796 thousand $BTC.”

As long as Bitcoin stays above the critical support areas, traders anticipate the cryptocurrency market to see a broader rally.

Michael van de Poppe, a full-time trader at the Amsterdam Stock Exchange, expects the total cryptocurrency market capitalization to soon break its all-time high of around $780 billion. He said:

“The total #crypto market capitalization is looking extremely bullish as it has been testing the all-time high region. Levels to watch are $550 and $450 billion. Any of these regions are buy dip opportunities. If these holds, next run will bring the market above ATH.”

Finally, we note that while Bitcoin’s surge is surprising to many, it is in fact merely catching up to the stock-to-flow model’s estimate of fair-value… 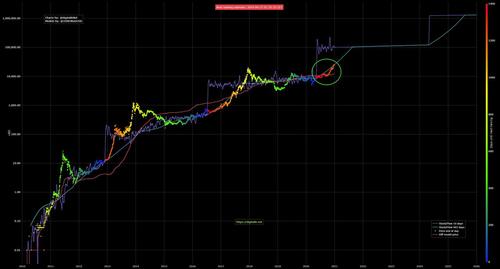 As Galaxy Digital CEO Mike Novogratz said on Thursday, the Bitcoin bull market has proven resilient to the recent wave of anti-crypto rhetoric coming from Capitol Hill: “It tells you about how powerful this bull market is […] They are throwing lots at the system, and it’s not actually impacting it.”

When People Trust in Men and Not in God