Bitcoin, The Chinese, & The Dollar

Authored by Martin Enlund via Nordea,

Could Bitcoin undermine the dollar and the United States? Perhaps. We do see reasons to mull the long-term value of the dollar – not primarily because of cryptocurrencies, but due the country’s economic-political choices and China’s continued rise… 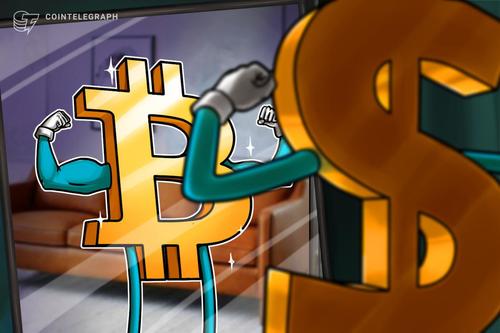 Investor and entrepreneur Peter Thiel recently wondered if not “Bitcoin should … be thought [of] in part as a Chinese financial weapon against the US”.

To try to explain what this could mean, we turn to recent economic research on fiscal and monetary capacity.

Public demand for dollars depends on inflation ­expectations (you do not want to hold zero-return notes when inflation is high). Low inflation expectations thus improve monetary capacity as more economic agents will want to keep a currency which is expected to maintain its (real) value.

Chart 1. A benign cycle between monetary capacity and fiscal capacity… 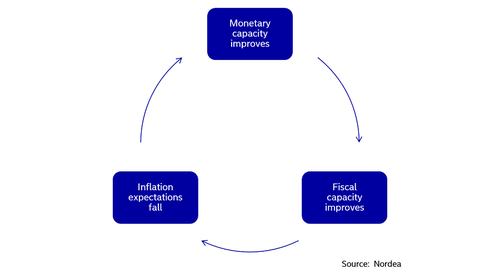 Before we return to what Peter Thiel (perhaps) meant, we can take a look at US’ fiscal policy at the end of 2020 and compare it to the situation in Sweden in 1993. In the early 1990s, Sweden experienced an enormous economic and financial crisis, and was forced off its currency peg in late 1992. To eventually stabilize interest rates and the Swedish krona, Sweden had to spend several years doing structural reforms while engaging in fiscal austerity. While it is surely problematic to directly compare the world hegemon the US, the dollar and its status as the prime global reserve currency, to Sweden and the Swedish krona, we do so anyhow for illustrative purposes.

Chart 2. Government debt and budget balance, US vs Sweden – oops? 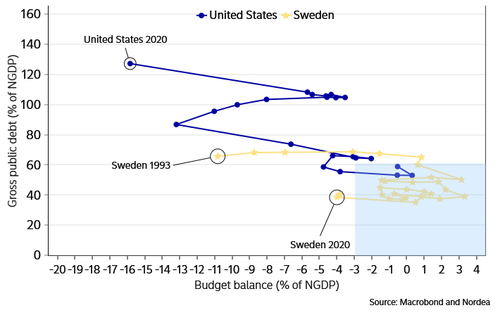 And this is before the new US infrastructure programme which risks being partly unfunded, which could lead to a higher deficit and increased debt. Moreover, if the US is serious about its new cold war with China and with Russia (Nixon split China and the Soviet Union – Biden seems to do everything he can to push Putin into the arms of Xi), and about a ”new green deal” to be able to ”build back better”, then you may ask if we aren’t just seeing the beginning of massive fiscal expansion (which might make the aforementioned budget metrics even worse).

Chart 3. Budget and current account deficits a possible structural headwind for the dollar 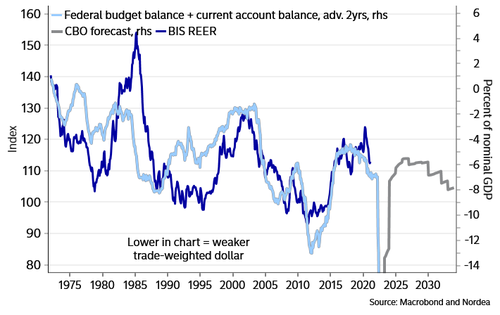 If, based on the above comparison of public finances, we were to conclude that the US’s fiscal capacity has decreased, we should also see increased inflation worries. Since the spring of 2020 this is something that has been seen across financial markets. During the winter of 2021 a well-known investor (Michael Burry – made famous by the book and movie The Big Short) even warned of a Weimar-like development. While he might mostly have been talking his book, increased inflation worries – or rising inflation expectations – could lower monetary capacity.

But back to Peter Thiel. He might be worrying that the US’s monetary capacity could be eroded by growing competition from, cryptocurrencies. For instance, unlike the (fiat) currencies we are used to, Bitcoin is designed to be deflationary. No central bank or banking system can create trillions of new Bitcoins.

If businesses and households were to decide to (and be allowed to?) increasingly hold cryptocurrencies instead of dollars, the US risks could experience decreased monetary capacity (and in the long term perhaps also fiscal) capacity – perhaps even a vicious cycle between the two?

Chart 4. Does a vicious cycle between monetary capacity and fiscal capacity beckon? 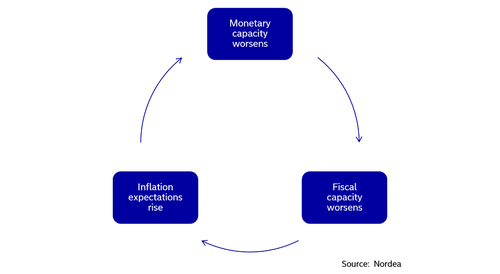 However, there is another and greater threat against the US’s monetary capacity. China’s e-currency DC/EP (Digital Currency, Electronic Payment), which is planned to be widely demonstrated no later than at the Olympic Winter Games of 2022, likely presents an even bigger challenge, however, for similar reasons.

As China’s GDP and role in world trade continue to grow, it seems natural to expect that countries, especially its neighbouring countries, will to a larger and larger extent start to use China’s currency as both invoicing and financing currency. And if demand for China’s currency increases, the appetite for dollars will decrease, which – keeping everything else equal – lead to reduced monetary capacity, which leads to decreased fiscal capacity. And so on.

Chart 5. The dollar’s share of the world’s currency reserves – gradually but slowly decreasing 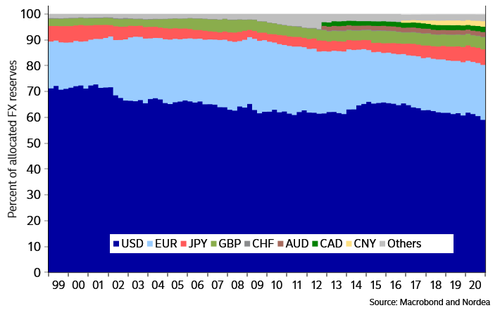 For all that, the dollar is likely to remain the world’s most important reserve currency for many years, perhaps even decades.. We do think there are reasons to doubt the general value of the dollar over the long term, however, not primarily because of the development of cryptocurrencies, but more due to the country’s economic-political choices (fiscal expansion, re-regulation and taxes) as well as China’s continued growth.

You can read more about our long-term concerns here, and our latest (actually somewhat dollar-positive) financial forecasts here.

Trump Jr.: “Here’s What Comes Next for Our Amazing Movement”

US Deep State Preempts Reset In Relations With Russia