Bitcoin and its peers surged to new record highs over the weekend on what Mike Novogratz believes was a wave of retail excitement after the stimmies (which fits with Mizuho’s estimates that around 10% of U.S. stimulus checks may be used to buy Bitcoin and stocks, equating to around $40b in total)…

“A lot of the stimulus checks are going to young people who want to buy #bitcoin,” says @novogratz. “What happens on the weekend is retail gets excited you can tell because the cost of leverage goes way up on the weekend.” pic.twitter.com/FST1xhJQFC

But, broad crypto markets took a hit this morning and initial headlines pinned the blame on India crypto regulations (which as we will see below were mixed at worst), but as CoinDesk notes, the catalysts would well be weaker buying pressure from institutional investors.

“The failure to establish a foothold above $60,000 and the decline is likely the result of the flat-to-negative Coinbase premium – a major bellwether for institutional demand,” according to Ki Young Ju, CEO of blockchain analytics firm CryptoQuant.

Specifically, CryptoQuant’s Coinbase premium indicator measures the spread between Coinbase’s BTC/USD pair and Binance’s BTC/USDT pair. A positive spread implies increased demand from high-net-worth investors and institutions, as these entities prefer to trade via regulated exchanges with over-the-counter desks such as Coinbase.

The premium was negative over the weekend when bitcoin broke above $60,000 and remains marginally positive at press time, implying weak institutional demand. 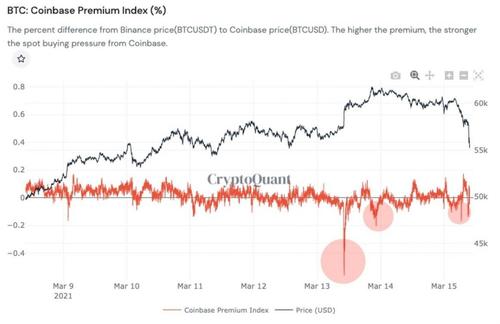 Having tagged almost $62 over the weekend, BTC has tumbled overnight since futures opened, erasing the weekend’s gains… 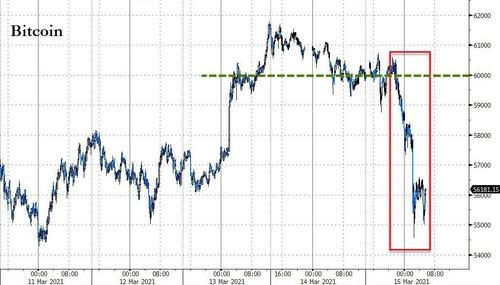 “Whale addresses holding 1,000 or more bitcoin have been selling, this does not mean the bull run is over, it just means that profit taking is happening,” according to market analyst Lark Davis. 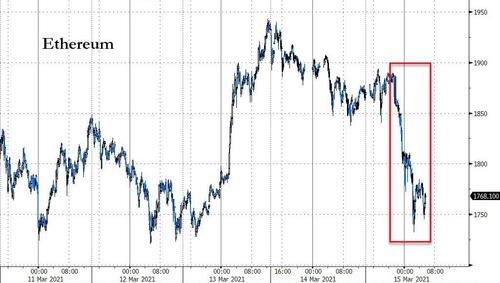 As the entire space got hit amid confusing messages from Indian officials. As one government official says the planned legislation would completely ban cryptocurrency use, another stresses that is not the case.

As reported by Reuters on Monday, trading, mining, issuance and possession of cryptocurrencies are expected to be criminalized in India with an upcoming legislative bill.

CoinDesk reports that the official, who was not named, said the legislation is likely to make it through Prime Minister Narendra Modi’s majority-controlled parliament.

However, on the same day as the Reuters report, the Deccan Herald cited Minister of Finance and Corporate Affairs Nirmala Sitharaman as saying the government is not planning to completely bar cryptocurrency use.

“From our side, we are very clear that we are not shutting all options. We will allow certain windows for people to do experiments on the blockchain, bitcoins or cryptocurrency,” Sitharaman said. She added the growth of the fintech industry depends on such experiments, per the report.

And Indian officials have been discussing crypto crackdowns for weeks.

We give Mike Novogratz the final word explaining that, amid India’s potential crackdown, bitcoin is ‘hard to kill’

“Bitcoin will literally be like a report card for how citizens think the government is doing managing their finances,” says Novogratz.

“We are in uncharted territories on how much money we are printing and btc is a report card on that.”

“#Bitcoin will literally be like a report card for how citizens think the government is doing managing their finances,” says @Novogratz. “We are in uncharted territories on how much money we are printing and #btc is a report card on that.” pic.twitter.com/z3W6GRfqkT

“Bitcoin isn’t so much a bubble as “the last functioning fire alarm” warning us of some very big geopolitical changes ahead.”