If the Nobel committee’s handing over of the Nobel peace prize to newly elected President Obama seemed like the nadir of the prize’s prestige, there’s now another thing coming. 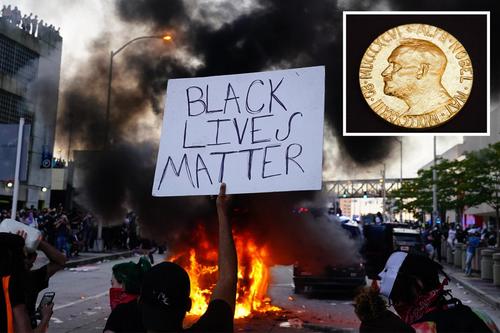 According to The Guardian:

The Black Lives Matter movement has been nominated for the 2021 Nobel peace prize for the way its call for systemic change has spread around the world.

In his nomination papers, the Norwegian MP Petter Eide said the movement had forced countries outside the US to grapple with racism within their own societies.

“I find that one of the key challenges we have seen in America, but also in Europe and Asia, is the kind of increasing conflict based on inequality,” Eide said.

“They have had a tremendous achievement in raising global awareness and consciousness about racial injustice.”

That’s right, a group led by self-described “trained Marxists” who literally spent time with Hugo Chavez in Venezuela and then triggered night after night of violent looting riots at a cost of at least 25 lives and a record $2 billion in insured property claims, (probably much more in uninsured property), and grotesque Red Guard-style repudiation scenes such as forcing restaurant diners to wave their fists in solidarity or face overturned tables and assault, is somehow … is worthy of the world’s top award for peace.

Back in 1964, when Martin Luther King, Jr. was awarded the same prize for calls to judge people on the content of their character over color, along with non-violent resistence, there was a recognizable standard for peace. Now, such approaches don’t cut it anymore for this Norwegian bunch. And to place BLM in the same league as MLK, Jr., is kind of obscene.

The Norwegian pol who put the nomination out cited BLM’s capacity to mobilize as his criteria. But that seems to be pretty shaky grounds, given that so many leftists out there really just wanted to Get Trump. BLM has since morphed into what appears to be a corporate shakedown racket and managed to get its Marxist identity politics party line into every corporate boardroom in America. But the capacity to use muscling community organizer tactics is no evidence of morality, or more pointedly, peace. BLM is never going to be satisfied no matter how much kowtowing is done, each victory it wins brings a bigger demand to its marks, without ceasing, until its will to absolute power is achieved. Sound like peace? Only of the grave.

What it highlights is how low the Nobel peace prize has fallen. Sure, this Norwegian socialist clown doing the nominating likely has no idea what’s going on in the states, given that he lives in isolated Norway, takes in meetings with activists, and only reads the leftist press. The idiocy of his proposal tops that of the Norwegians handing out a Nobel prize to Barack Obama just for getting elected president for being black without doing anything else.

In both instances, the Nobel committee nominators seem to relish anyone with the ability to exert leftist power, equating that kind of power-mongering with ‘peace.’ It’s a sorry act they’ve come to, to worship power over any semblance of authentic peace. If this is peace, what a sorry state of affairs we have, mau-mauing’s triumph over actual creating of peace. Will all Nobel peace prize recipients have to show proof of starting riots to qualify now? How, exactly, is riot-making ‘peace’? One likes to suppose that this nomination will go nowhere, but with the current nonsense going on, don’t bet on it.

Americans Are Fleeing Lockdowns, When They Can Afford It