Almost two months ago, Nomura correctly predicted that once the 10Y breaches 1.50%, stocks would freak out and sure enough that’s precisely what happened (with Nomura’s forecast becoming self-fulfilling and sparking a stop loss cascade one the 10Y hit 1.50% last Thursday, sending the 10Y as high as 1.61% in a matter of seconds following last week’s dismal 7Y auction).

So now that 1.50% is yesterday’s news, Wall Street is scrambling to define the next critical level for 10Ys beyond which there will be blood. As a reminder, yesterday Goldman hinted that 2.10% is what traders should be looking at, but that seems a lot, especially with many far more accurate forecasters saying that the Fed will have to engage YCC around 2.0%, and for that to happen stocks would need to crash first. Therefore, the next critical level is likely one between 1.50% and 2.0%.

One such level was proposed by BofA’s chief equity strategist, Savita Subramanian who today writes that “history suggests that 1.75% on the 10-yr (the house forecast and ~25bp above current levels) is the tipping point at which asset allocators begin to shift back to bonds” and thus sell stocks in the next wave of aggressive liquidations.

Why 1.75%? Because that yield on the 10Y is decisively above the S&P’s dividend yield, and where according to BofA “there is an alternative to stocks”, or TIAA. 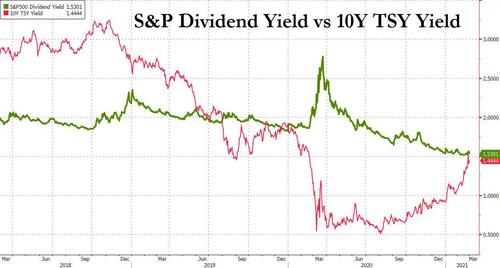 As Bloomberg notes, TIAA would represent a reversal to a mantra popularized in recent years as yields on Treasuries fell to historic lows and inflation stayed muted. For many, TINA – “there is no alternative” to stocks – helped rationalize a turn to riskier assets and justified S&P 500 valuations that are near their highest in two decades.

So after last week’s fireworks, will bonds continue to rise from the current level of 1.43%, and how fast until they reach the new “tipping point”? Well, after last week’s historic rout, which culminated the 2nd worst bear market for bonds in the past 40 years… 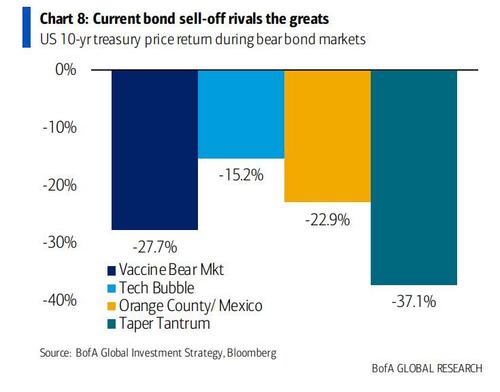 …. CTAs had been the most bearish on long-dated bonds since 2018, but as Nomura pointed out they had started to cover their shorts, usually an early indicator that yields have topped out for the time being and are set to drop, with Nomura estimating “that the 10yr UST yield is currently about 30bp above the fair-value yield implied by trend-following strategies. Short-covering by CTAs and other speculators for the sake of locking in profits may serve the purpose of reeling the 10yr UST yield back in.” 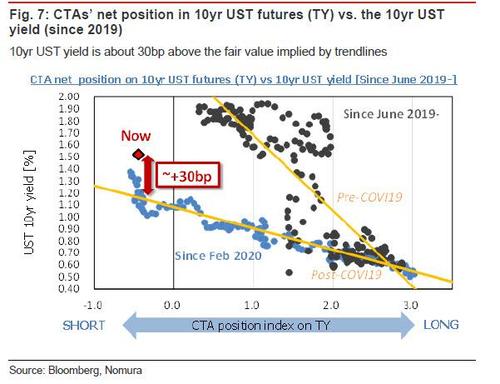 Separately, rising growth expectations have also fueled huge gains for commodities with the likes of corn and soybeans up roughly 50% in the past year. On a six-month rolling basis, both offered higher risk-adjusted returns, or Sharpe ratios, than the famously high-flying Bitcoin, according to Quantica. However, in an ominous reversal, over the weekend China reported disappointing PMI prints… 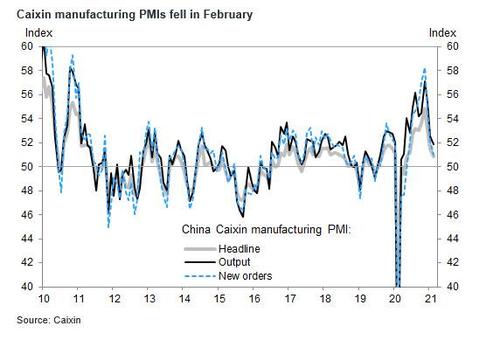 … which suggest that the global reflation trade sparked by the world’s biggest credit dynamo, Beijing, could be starting to fizzle. 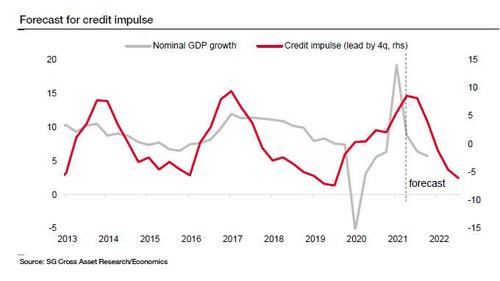 What’s worse, the propagation of the slowing Chinese credit impulse would have adverse consequences on all inflation-sensitive assets. 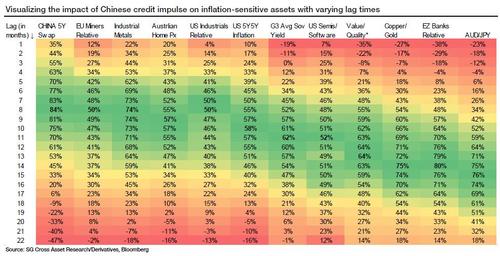 The only question is how long before China’s credit slowdown is manifest in real yields. And here, according to one of our favorite charts, we probably have another 6-9 months of real yield upside before yields come crashing down again. 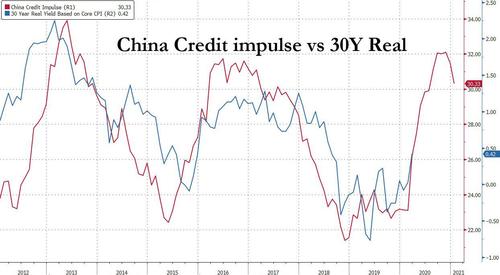 Indeed, after last week’s freakout, some Treasury bulls have emerged, and according to Jim Paulsen, chief investment strategist at the Leuthold Group, the 1.75% level may be further away than it seems. Paulsen believes that the spike in bond yields could take a pause around 1.5% before embarking on another leg higher. Among the reasons he cites is the recent bout of colder weather, which could result in weaker economic data – including slower retail sales – in the next month. That will dampen anxieties over economic overheating, he wrote in a note.

“Yields still have further to rise this year,” said Paulsen. “But, if they do it a bit more slowly and intermittently, rather than all at once, the impact on the economy and the stock market should be far-less damaging.”

Of course, others disagree. One among them is Sonal Desai, Franklin Templeton’s fixed-income chief who is back with another big bet that rising inflation will prolong the slump in U.S. Treasuries. As Bloomberg notes, Desia says the 10-year yield could jump above 1.75% by the end of the year, compared with around 1.43% currently.

“Inflation could easily overshoot under the approving eye of the Fed,” wrote the chief executive officer of the debt division with around $155 billion in a note. She cited price pressures including accelerating growth, the vaccine rollout, massive fiscal stimulus and the historic growth in money supply.

To be sure, one could simply respond that Desai, along with her colleague Michael Hasenstab, have been broken records, predicting the end of the bond rally for years. Worse, he track record is rather dismal: her previous predictions about the Treasury market have fallen flat, amid relentless investor demand, and unexpected economic shocks including trade frictions and the pandemic itself. In October 2019 she projected that the 10-year yield would rise to 3% within 12 months. It peaked at 1.9% over that period before dropping to as low as 0.5%.

Misfiring bearish bets have hit Hasenstab’s Templeton Global Bond Fund with $15 billion in assets, which was forced last year to unwind a multi-year short position on Treasuries. The fund still maintains low duration, according to filings, though that stance still hasn’t spared it from a 1.9% loss so far this year.

That has not stopped Desai, who helps oversee everything from credit to money markets, to put her investors’ money where her mouth is, and she says she is trading her conviction on higher Treasury yields by being selective in high yield and emerging-market investments. She also favors securities in the floating-rate loan market, according to the note.

“Both the Fed and the European Central Bank have reiterated their reassurance that monetary policy will remain supportive, but markets may be challenging central bank credibility,” Desai wrote. “Given the underlying strength of the economy, I think widening spreads will offer opportunities in short duration fixed income assets in the coming weeks.”

Here’s the problem: Desai may well be right and central bank credibility could soon be completely gone. However, in that case, the first people out of a job will be asset managers such as Desai and all her peers at Franklin Templeton as the ensuing historic crash will guarantee that total losses on everything else dwarf what little profits the bond manager can make on its Treasury short.