Looking at the perplexing action over the past few week, over the weekend we wrote that “Another Market Paradox” had emerged as “Wall Street Struggled To Explain Record Equity Inflows Amid Stock Turmoil.” In other words, who was buying – seemingly in record amounts… 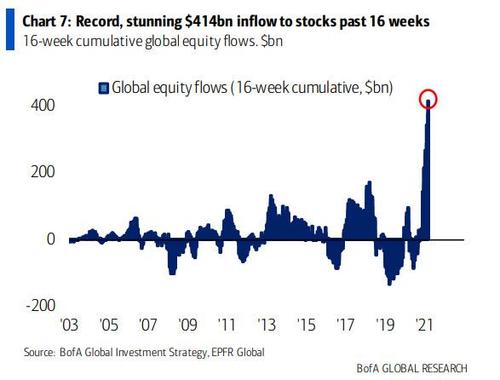 … even as stocks were tumbling?

Well, overnight BofA provided an answer: at least when it comes to its own clients, the bank said that “everyone bought the tech rout.“

But first offering up some context, BofA’s equity and quant strategist Jill Carey Hall explains, that clients continued to buy equities at an aggressive pace with the $3.7BN in net inflows into US stocks last week reaching the 98th percentile of weekly flows in BofA data history since 2008, and the highest since mid-Dec.

So looking at its client base (of hedge funds, institutions, HNW retail) BofA said that they were buyers of both single stocks (11-week high) and ETFs (16-week high). All three major clients group were net buyers, led by hedge funds (biggest net buys in 12 weeks), with purchases accelerating for hedge funds and institutional vs. the prior week but decelerated for retail.

Predictably, last week’s big net buying was concentrated on the one sector that was routed – Tech – which saw another near-record weekly inflow ($2.6B, the highest in over seven years). As a result, four-week average Tech flows have hit a new record high.

But if investors flooded into single name tech stocks, who was selling? The answer appears to be ETFs.

BofA explains that even as investors were flooding into single tech names, flows into Value ETFs were at a 5wk high while Growth ETFs saw the biggest outflow in a month amid the continued rotation. Of note: 10 of 11 sector ETFs saw inflows, led by Energy, Fins, and Tech. Real Estate was the only sector ETF to post outflows.

Similar to single stocks, all size segment ETFs saw inflows, led by large caps with flows at an eight-week high. Large cap single stock flows reached the highest since mid-Dec and in the 99th percentile of BofA’s historical data

Meanwhile, corporate buybacks also accelerated, driven by Tech for the third week in a row. In fact, buybacks reached the highest level since Nov. 2019 (99th percentile of our weekly data sincemid-2009), though cumulative YTD still remain 19% below 2020 levels at this time. 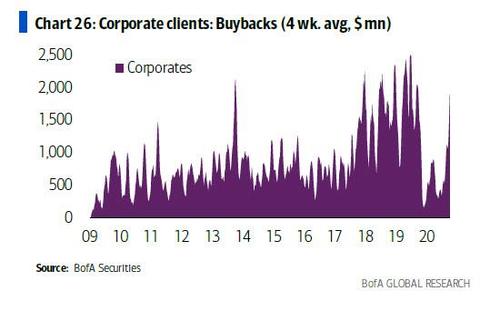