Bonds & Bullion Are Being Dumped As Bitcoin & The Dollar Surge

Gold and bonds are getting dumped amid the ongoing fallout from the Archegos debacle, and the dollar is bid, as it appears a broad-based demand for liquidity is trumping any quarter-end rebalancing flows that may have been expected. At the same time, bitcoin has been stable and acted as a source of stability.

Rather unexpectedly, Treasuries are being sold into quarter-end, with 10Y yields back above 1.75%… 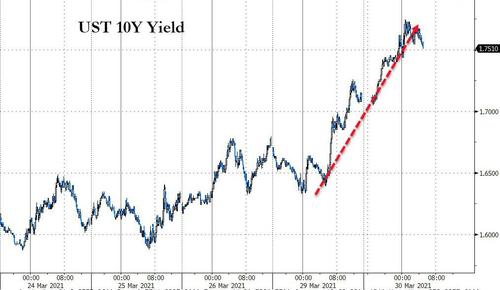 Gold futures are back below $1700 as the sell first, think second plan for liquidity appears to be in play.. 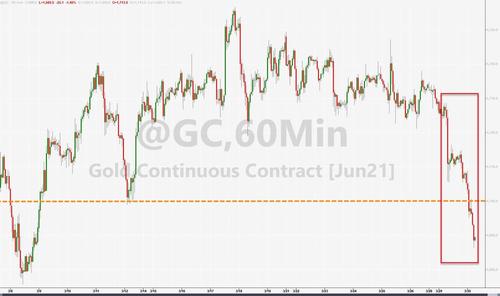 And dollar demand has sent the greenback to cycle highs… 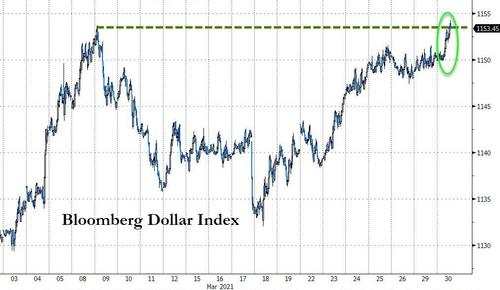 And through all of this, crypto has been bid with Bitcoin surging back up near $60,000… 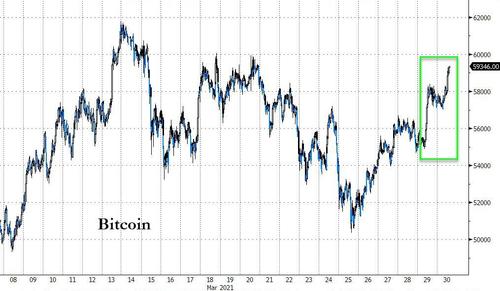 While bitcoin’s stability through this volatile last few days has been notable, it has been helped by positive catalysts after last week’s massive option expiration passed (lifting some downward pressuring pin risk), and PayPal’s president and CEO confirmed.this morning that a checkout service will be implemented which waives transaction fees for purchases made using crypto.

CoinTelegraph reports that news broke regarding PayPal’s rumored decision to accept cryptocurrencies early on March 30. Later in the day, the firm’s CEO, Dan Schulman, confirmed to Reuters that the rumors were true and that an official statement would be released imminently.

The new system is expected to feature a crypto checkout service where users can pay for goods and services at approved vendors using their stored coins. The system will reportedly see merchants receive equivalent funds directly in fiat currency after coins are subject to a quick transfer at the time of sale.

The checkout service is expected to be available for all four of PayPal’s supported cryptocurrencies upon launch, consisting of Bitcoin (BTC), Ether (ETH), Litecoin (LTC) and Bitcoin Cash (BCH). Customers who pay with cryptocurrencies will incur no transaction fees on purchases, and only one coin can be used per purchase.

“We think it is a transitional point where cryptocurrencies move from being predominantly an asset class that you buy, hold and or sell to now becoming a legitimate funding source to make transactions in the real world at millions of merchants,” said Schulman, regarding the launch.

The PayPal news comes just 24 hours after Visa announced that it would pilot a new payments system using stablecoins on the Ethereum blockchain. The pilot will see participating merchants agree to settle customers’ fiat transactions using the USDC stablecoin.