Boston Dynamics’s robot dog has generally been used for corporate applications, such as surveying a Ford Motor Co. factory or working on a BP plc oil rig. Now it appears “Spot” is one step close to becoming a killer robot as it trains with the French Army.

Last Tuesday, the Saint-Cyr Military Academy, a top French military academy, published pictures of a field training exercise between Mar. 30-31 on their Twitter account. There were several robots tested during the training session, including Boston Dynamics’ Spot. 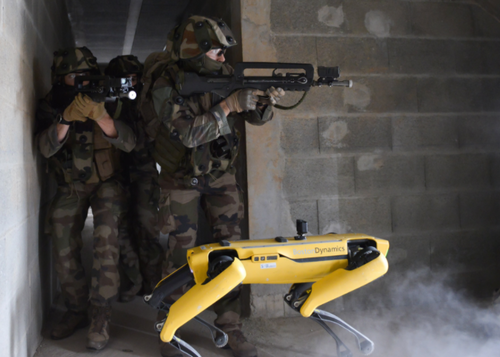 The field training exercise was a two-day session with the aim of “measuring the added value of robots in combat action,” said school commandant Jean-Baptiste Cavalier.

Local newspaper Ouest-France provided more details on the usefulness of the robot on the modern battlefield.

Boston Dynamics’ vice president of business development Michael Perry told The Verge that a European distributor, Shark Robotics, had given Spot to the military and that the US-based firm had not been informed about the training exercise.

“We’re learning about it as you are,” said Perry. “We’re not clear on the exact scope of this engagement.” The company said it had some information on its robots being used by the French government, including the military. 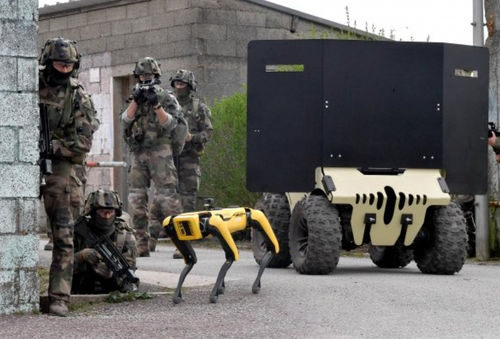 The two-day exercise was offensive and defensive field training exercises. Each exercise was with and without Spot and other robots. The idea is that the French government wanted to collect data on the impact robots would have on the modern battlefield.

It’s still not entirely clear what role Spot played during the exercise as there was no evidence in the pictures within this note that the robot had any special optical sensors mounted on it. 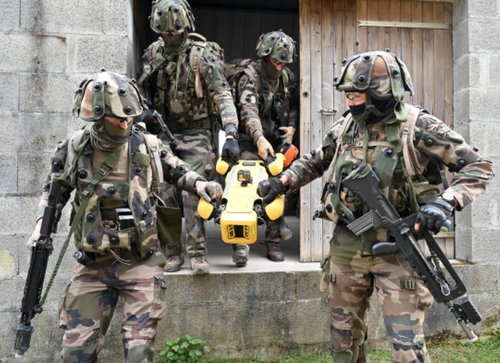 Besides Spot, the French military included OPTIO-X20, a remote-controlled vehicle with tracks and autocannon built by Estonian firm Milrem Robotics; ULTRO, a wheeled “robot mule” made for transporting equipment manufactured by French state military firm Nexter; and Barakuda, a multipurpose wheeled drone that can shield soldiers for direct enemy fire.

Spot’s terms and conditions prohibit the use of weaponizing the robot “to harm or intimidate any person or animal, as a weapon, or to enable any weapon.” One could argue that if Spot is used as a reconnaissance robot, it would indirectly harm a human being (a gray area).

Boston Dynamics’ told The Verge that the company had policies prohibiting suppliers or customers from weaponizing the robot.

A few months ago, a company called MSCHF who is responsible for the most absurd viral stunts and products on the internet. Strapped a paintball gun to Spot and let online users shoot random objects in a staged museum.

MSCHF said the only “losers” of the event would be the “human race when remote-operated dogs of war become commonplace. As these war dogs become fixtures of militaries and militarized police, we will all learn a new meaning of fear: an oppressor who can pull the trigger without even needing to be physically present.”