In what is without a doubt one of the biggest pandemic milestones since the start of the year, the US has finally ceded its spot as the world’s worst-hit nation to Brazil, which reported more daily cases and deaths than the US for the first time ever on Tuesday. 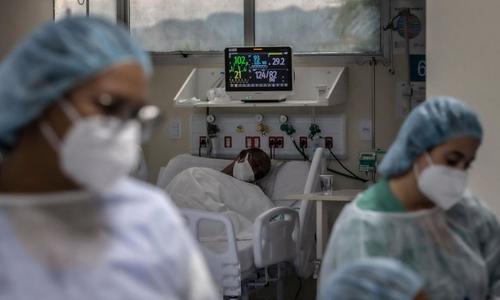 Brazil’s worsening outbreak is stoking fears that mutant COVID strains could precipitate a “4th wave” of the virus as a mutant strain first isolated in the Brazilian Amazon has now spread across the country. We first reported on this new strain, which caught the attention of researchers when it started killing more young people in Manaus back in January.

Brazil’s daily Covid-19 death toll surged to 1,972 on Tuesday, its highest daily tally yet since the start of the pandemic. By comparison, the US death toll on Tuesday was 1,947. It marked the first time deaths in Brazil topped deaths in the US, which has a population more than 1/3rd larger than Brazil’s.

Meanwhile, new cumulative cases in Brazil topped new cases in the US for the first time earlier this week, but the trend has persisted and now the 7-day average is also solidly higher in the Brazil than in the US.

Over the past week, Brazil has been recording 1K new cases roughly every 30 minutes. As many countries see COVID cases taper off, Brazil is one of the few large nations where the outbreak is actually getting worse.

Per WSJ, public health specialists are blaming the rapid spread on the mutant P.1 strain of the virus mentioned above. The mutation was first isolated in the Amazonian city of Manaus. Studies have shown it to be more contagious and better able to reinfect people than previous versions of the disease. Deaths have also surged as Brazil’s health system has struggled to cope. There have been more reports of patients who could have been saved being left to die in chaotic hospital corridors.

Brazil is now home to 100s of new mutant strains, and other more dangerous versions of the virus could emerge.

“It seems like a nightmare,” said Mohamed Parrini, chief executive of the Moinhos de Vento Hospital in the southern city of Porto Alegre, who has been working to convert hospital wards into makeshift ICUs. “The saddest thing is when you start to see the people around you also getting intubated—people’s husbands, the spouses and uncles of employees.”

As the outlook in Latin America’s largest economy worsens, the only real silver lining here is that trial data published earlier this week show that a vaccine developed by Sinovac, one of a handful of Chinese companies that has developed a jab, has been shown to be effective against the P1 variant, though Brazilian President Jair Bolsonaro has cautioned Brazilians to be wary of Chinese vaccines.

Who and What Killed George Floyd?