The breatheless rally in the 10Y Breakeven rate since the March lockdown lows has continued, and on Tuesday morning it hit a high of 2.03%, the highest level since December 2018. This even as real rates – which are determined by TIPS – have cratered to -1.09%, the lowest level this century.

Validating expectations for higher inflation in the near-term is the concurrent levitation in 5Y-5Y forwards which are similarly trading at 2.25%, well above the Fed’s target, and refuting skepticism that prices will rise above the Fed’s (increasingly soft) 2% inflation target. 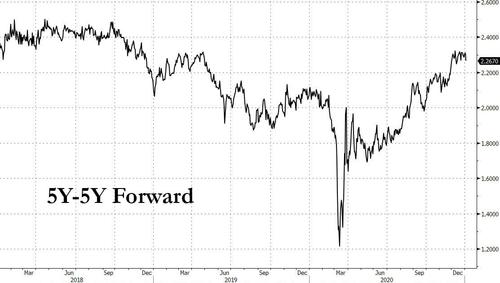 We won’t go to in depth into the reasons behind the ongoing surge – we covered them yesterday when discussing the implications of a potential Georgia sweep – suffice to note that rates traders are now clearly equating a blue sweep later today with much higher yields. Bloomberg explains:

The outcome of the vote, results of which will likely be known Wednesday morning, is seen as having huge implications for Treasury supply this year, as well as the direction of yields. A unified Democratic government is expected to provide a green light for additional fiscal stimulus, spurring more bond issuance and higher yields on longer-maturity Treasuries.

Traders seem to be bracing for that prospect, driving yields higher and the yield curve steeper on Tuesday, with a key measure reaching the steepest in four years. It gained momentum after stronger-than-expected manufacturing data and a large futures block sale.

Separately, the latest JPMorgan Treasury client survey found the biggest share with short positions since October 2018, an indication of trader expectations that yields are set to rise even more. Finally, in Treasury options, the cost of buying protection against an upside move in long-end Treasury yields over the next month, versus a downside move, has risen to the most since November.

Yet while breakevens and swaps are clearly telegraphing much higher inflation down the line – in what would be a major hit to the Fed’s credibility which has repeatedly said it won’t hike rates until 2022 or 2023 – why do nominal years remain as low as they are? Well, the reason why the 10Y nominal yield is trading at 0.96%, which while close to the highest levels since March is far below where it was a year ago, is because real rates remain at generational lows which in turn is a function of the Fed gobbling up TIPS in the generally illiquid TIPS market.

Additionally, markets are unlikely to push nominal yields much higher as there is always a risk the Fed would implement yield-curve control should 10Y yield spike higher, leading to a major selloff episode like the one Morgan Stanley’s Michael Wilson warned about yesterday.

But if nominal Treasury yields no reflects future inflation – but merely Fed monetary stimulus intentions – and the bond market no longer discounts the future, what are traders to use instead to make bets on reflation?

One answer comes from Morgan Stanley’s Michael Wilson who yesterday made a stark assessment of the current situation, and proposed that bitcoin is now perhaps the most attractive instrument with which to gauge the risk of an inflationary conflagration:

We believe the big surprise of 2021 could be higher inflation than many, including the Fed, expect. Currently, the consensus is expecting a gradual and orderly increase in prices as the economy continues to recover. However, the move in asset prices like Bitcoin suggest markets are starting to think this adjustment may not be so gradual or orderly.

We concur. With global GDP output already back to pre-pandemic levels and the economy not yet even close to fully reopened, we think therisk for more acute price spikes is greater than appreciated. That risk is likely to be in areas of the economy where supply may have been destroyed and ill prepared for what could be a surge in demand later this year—e.g. restaurants, travel and other consumer/business related services. The best inflation hedges are stocks and commodities in the intermediate term. However, inflation can be kryptonite for longer duration bonds which would have a short term negative impact on valuations for all stocks should that adjustment happen abruptly.

In short, anyone who wishes to know where inflation is going may well keep an eye on breakevens, 5Y5Ys and, to a lesser extent, nominal yields, but the most accurate instrument of where prices are going may be this: 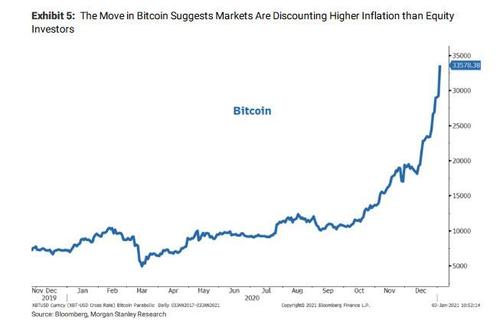