Authored by Tsvetana Paraskova via OilPrice.com,

The rising premium of North Sea’s benchmark Brent over Dubai crude is making shipment of Brent-linked oil to Asia more expensive and likely to reduce in the coming months, traders and market sources tell Bloomberg.

The Brent premium over Dubai jumped to the highest since December 2019 at over $3 per barrel on Tuesday, according to data from PVM Oil Associates cited by Bloomberg. 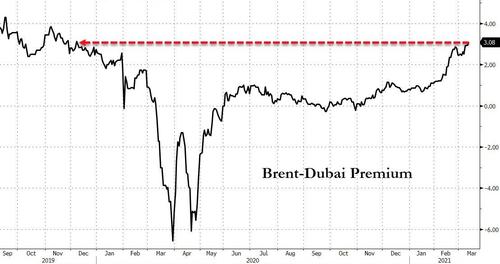 The key reason for this is the upcoming heavy maintenance on a number of oilfields in the North Sea, which will reduce the availability of North Sea oil to the market. Dated Brent is also much higher than Dubai crude in recent months because of the lower production of U.S. light sweet oil out of the American shale patch that would have otherwise competed with the North Sea oil.

Therefore, the highest premium of Brent over Dubai in nearly 15 months will likely be closing the arbitrage for some Atlantic basin crudes to be shipped to Asia, the region which is showing relative resilience in crude oil demand these days.

Other crudes priced off Brent, such as Russia’s Urals and crudes from West Africa, could also find it more difficult to attract buyers in Asia, in view of the rising premium of Brent over Dubai, off which the Middle Eastern oil producers price their oil to Asia.

Sales of Russia’s Urals are currently slow, while Nigeria struggles to place its barrels that would typically sell in Europe if it weren’t for the still low European demand due to the COVID-19 lockdowns, traders and sources told Bloomberg. 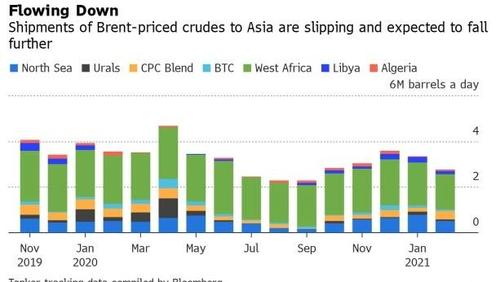 The current struggles of North Sea oil finding buyers in Asia are in stark contrast with the market situation just two months ago, when Saudi Arabia’s surprise announcement in January that it would cut 1 million bpd beyond its share of OPEC+ cuts had refiners in Asia scrambling to secure supplies from Europe, with record purchases of North Sea cargoes in one day.

Comrade De Blasio: “I’d Like to Say Very Bluntly: Our Mission is to Redistribute Wealth” (VIDEO)