When the Electoral College meets Monday, it will almost surely certify former Vice President Joe Biden as the 46th president of the United States. And he will take the oath of office Jan. 20.

There is, nationally, a growing if grudging realization of that reality.

Yet millions of Americans will refuse to accept the legitimacy of that election and its outcome and will continue to believe, with President Donald Trump, that it was “rigged.”

“Was the 2020 election stolen by the establishment to get rid of a president, Donald Trump, whom it loathed?” will be debated decades hence — as are questions such as, “Did FDR have advance knowledge the Japanese were going to attack?” and, “Did Lee Harvey Oswald act alone in Dallas?”

That perception that something was afoot first arose in the minds of millions in the hours after the election on Nov. 3, when 83% of Republicans polled by Gallup said they did not believe reports of Trump’s defeat.

Things perceived as real are real in their consequences. 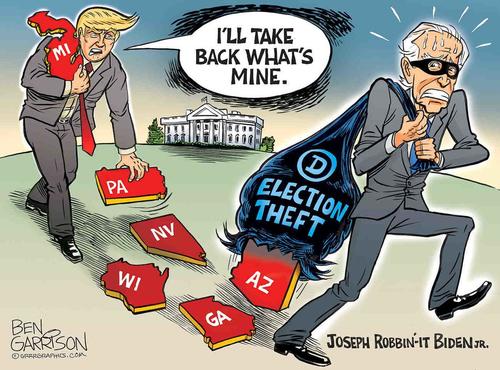 And there was justification for that perception.

Who was not stunned to learn that as Trump seemed to be pulling ahead in the voting count on Nov. 3, suddenly, around midnight, the vote counting appeared to stop in the crucial swing states, and we were told it would begin again early the next morning? Why the halt?

Again, things perceived as real are real in their consequences.

The Washington Post reports this week that, midway between Election Day and Inauguration Day, only 27 congressional Republicans would acknowledge Biden’s win. Some 220 GOP members of the House and Senate — 88% of Republicans serving in Congress — would not say who won the election.

And Trump continues to fight on, millions behind him, to persuade public officials in such battleground states as Pennsylvania, Wisconsin, Michigan, Georgia, Arizona and Nevada to withdraw their certifications.

He is said to be working the phones to get Republicans in Congress to reject the designation of Biden as president.

He has joined a suit by 17 states’ attorneys general to have the Supreme Court accept Texas’ argument that late alterations in the voting processes in four swing states be declared unconstitutional and illegal.

Among the more credible charges is that, due to the pandemic, late changes were made in the voting processes of states, especially with mailed-out and mailed-in ballots. The contention is that votes cast as a consequence of changes done contrary to state laws or constitutions should be thrown out. Most of those votes came from the urban precincts where Biden’s margins were massive.

While some 50 lawsuits filed in Trump’s cause may have been rejected in courts, the hourly allegations of fraud in the collection and counting of ballots have given credence to a generalized belief that Trump was cheated of votes he received and Biden received votes that were illicitly cast.

American politics will be even more poisoned and polarized than it has been for the last four years. Tens of millions of Americans will see themselves as disfranchised and believe that the greatest champion they have had in decades was illegally driven from power by the same deep state-media conspiracy he fought for four years.

Reinforcing this perception is the sudden revelation this week that Biden’s son Hunter is indeed the target of a federal tax investigation.

That is a story the mainstream media not only refused to cover but sought to bury. And it further buttresses a widespread belief that the mainstream media were in the tank for Biden and will use the power they have to fix the outcome of future American elections in favor of the establishment to which they belong.

For scores of millions of Americans, the mainstream media have lost any credibility and moral authority they once had.

The media have spent four years promoting the falsehood that Vladimir Putin and Donald Trump conspired to steal the 2016 election, a charge for which the two-year Robert Mueller investigation could not find any substance at all. They championed the cause of impeachment of Trump over a single comment in a phone call to the president of Ukraine.

And all the while, they painted Trump as racist, sexist, homophobic and treasonous, and his followers as torch-carrying deplorables.

The hypocritical calls from the mainstream media today for us all to come together, after the atrocities they perpetrated, boggle the mind.

Amazing. And now that the Democrats appear to have captured the White House, the message is, “Can’t we all just get along?”

Some see secession. But though secession is unlikely, a secession of the heart has already taken place in America.

We are two nations, two peoples seemingly separated indefinitely. Can a nation so divided as ours, racially, ideologically, religiously, still do great things together, as did the America of days gone by, to the amazement of the world?

Video: The Future of Vaccines

Writers, of all people, are now censors