Buchanan: Who Really Imperils The Republic?

“That attack, that siege” of the Capitol, FBI Director Chris Wray told Congress, “was criminal behavior, plain and simple, and it was behavior we at the FBI view as domestic terrorism.”

For what had been President-elect Joe Biden’s reaction to the Capitol riot?

Yet, the phrase domestic terrorism conjures up events from our past far graver than a four-hours occupation of the Capitol. Nat Turner’s rebellion. John Brown’s 1859 raid on Harper’s Ferry. Timothy McVeigh and Oklahoma City.

The near assassination of Harry Truman at Blair House by Puerto Rican nationalists, Nov.1, 1950. The shooting and wounding of five congressmen from the House gallery on March 1, 1954.

The 1974 bombing of New York’s Fraunces Tavern — where Gen. George Washington said farewell to his officers — also the work of Puerto Ricans demanding independence. Four died there and 50 were injured.

Yet, in the “domestic terrorism” at the Capitol, no protester set off a bomb, toppled a statue, or fired a weapon. Of the four who died that day, all were protesters. Ashli Babbitt, 35, a 14-year Air Force veteran, was shot to death by a Capitol cop as she tried to force her way into the Senate chamber.

A rioter and law-breaker, yes, but a terrorist who deserved to die?

Benjamin Phillips, 50, died of a stroke; Kevin Greeson, 55, of a heart attack. Rosanne Boyland, 34, was apparently crushed in the melee.

Capitol police officer Brian Sicknick died of a stroke the next day. Media reports that he had been hit with a fire extinguisher proved false. In the two months since Jan. 6, no one has been charged in his death.

Was Wray’s FBI alerted in advance of this impending act of domestic terrorism? Apparently, it was.

“A… report, prepared by the FBI’s Norfolk field office a day before the riot, … warned of specific appeals for violence, including a call for ‘war’ at the Capitol.”

The report quoted a source urging Donald Trump supporters to go to D.C. “ready to fight.”

“Congress needs to hear glass breaking, doors kicked in, and blood from their BLM and Pantifa slave soldiers being spilled. Get violent, stop calling this a march or rally or a protest. Go there ready for war. We get our President or we die. NOTHING else will achieve this goal.”

What did Wray do with this hair-raising warning? Did he call the D.C. police or Speaker Nancy Pelosi to alert her to what might be coming her way?

No. Wray never saw the Norfolk report. It was not passed up the chain of command to his office until after the riot. It was sent by email to the FBI’s Joint Terrorism Task Force, which includes the D.C. and Capitol Police, posted on a website and mentioned in a command center briefing in D.C.

Nonchalance seems to have been the FBI’s order of the day.

As acting D.C. police chief Robert J. Contee III told Congress, “I would certainly think that something as violent as an insurrection would warrant a phone call.”

One would think so. Explanations are needed.

How can Wray call a breach of the Capitol by a Trump crowd, an “act of domestic terrorism,” when his own subordinates did not regard it as sufficiently serious enough to give him a heads-up?

And is it not hyperbole to use terms like “domestic terrorism,” “armed insurrection,” “coup d’etat,” and “treason” to describe protesters pushing through police lines into the Capitol to disrupt a proceeding?

What is going on here?

The left will not let this go. It is exaggerating and exploiting what happened at the Capitol to paint the right as an ominous threat to American democracy — and itself as the savior of the republic. It seeks to demonize the populist right, cancel its voice, expel it from the public square and redefine it as a conspiracy against America, calling forth new government authority and power to monitor, expose and destroy it. 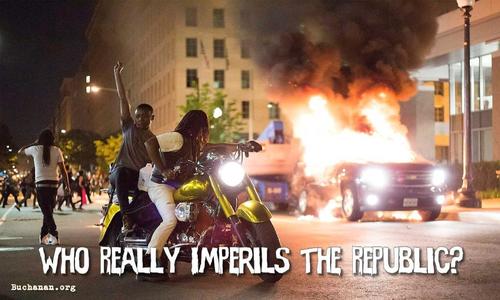 If assaulting cops and besieging public buildings amounts to domestic terrorism, the rioting, looting, arson and assaults on cops we saw all last summer in Minneapolis, Portland, Seattle, Kenosha and Louisville from antifa and Black Lives Matter protestors would more than qualify.

Today, Capitol Hill is encircled with high fencing topped by razor wire and patrolled by National Guard troops. It looks like the Green Zone in Baghdad. Apparently, the physical barriers and troops are there to protect against attacks by QAnon and white supremacists.

Minneapolis is taking similar precautions to protect the courthouse where ex-cop Derek Chauvin is to be tried for second-degree murder in the death of George Floyd.

My guess, Minneapolis, not Capitol Hill, is where the action will be this spring, and it will not be Proud Boys keeping the cops busy, but folks who, if they did vote in 2020, voted Democratic.

“This Is For You, Dad”: Redditor Shares Heartbreaking Reason For Destroying Short-Sellers In WSB Raids