This year’s Super Bowl was long destined to be a far cry from the usual spectacle as a result of the pandemic. Super Bowl LV, which will be held at Tampa’s Raymond James Stadium, will see only 22,000 fans witness the game in person compared to a stadium capacity of 65,000.

With the NFL’s ratings declines likely to spill into Super Bowl LV, a handful of companies that are regularly big spenders on ads have decided to opt out of advertising for this year’s game, albeit not entirely in some instances.

Pepsi announced earlier this month it wouldn’t advertise its namesake brand, Pepsi, so it could focus on the halftime show it’s sponsoring. Pepsi’s vice president of marketing, Todd Kaplan, said the decision to skip ads in favor of the half time show was not driven by spending cuts.

Kaplan said other Super Bowl advertisers are “talking and fighting for 30 seconds” of people’s attention while he cited data showing the halftime show is responsible for some of the most-watched moments during the telecast.

Pepsi, which spent more than $31 million advertising during last year’s Super Bowl, will still run ads for its other brands such as Mountain Dew and Frito-Lay products.

Pepsi’s competitor, The Coca-Cola Company, also followed suit and said it made the “difficult choice” to not run ads so it could “ensure we are investing in the right resources during these unprecedented times.” Coca-Cola, which spent $10 million on Super Bowl ads last year, announced last month that it was laying off 17% of its global workforce.

This week Anheuser-Busch announced it wouldn’t run an ad for its Budweiser brand for the first time since 1983. The company will instead donate what it would have spent on an ad—which is currently $5.5 million for 30 seconds compared to $5.6 million last year, to coronavirus vaccination awareness efforts. 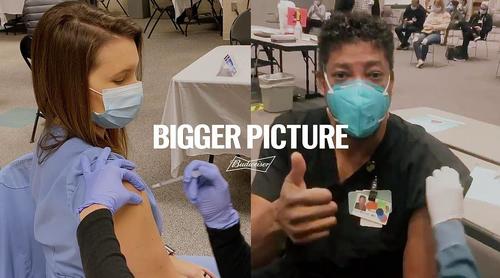 The company will instead run four minutes worth of ads for its other brands that are becoming increasingly popular such as Bud Light, Bud Light Seltzer Lemonade, Michelob Ultra and Michelob Ultra Organic Seltzer.

Beyond the ratings decline, some believe advertisers just don’t see the value in running ads this year given the overall mood among people.

“I think the advertisers are correctly picking up on this being a riskier year for the Super Bowl,” Villanova University marketing professor Charles Taylor said. “With COVID and economic uncertainty, people aren’t necessarily in the best mood to begin with. There’s a risk associated with messages that are potentially too light. … At the same time, there’s risk associated with doing anything too somber.”

As more well-known brands drop out of advertising for the big game, newcomers such as Triller, Fiverr, DoorDash, Mercari and Huggies are all making their Super Bowl ad debuts.

With everything from ratings, the economy and the pandemic weighing on the Super Bowl, some advertisers are reevaluating the cost of spending millions on a Super Bowl ad while others are embracing the opportunity.

Why Is There Such Reluctance To Discuss Natural Immunity?