Buffett Proposes A $8.3 Billion Fix For The Texas Power Grid… There Is Just One Catch

One of the main lessons from the deadly Texas polar blast disaster last month which left millions of homes without power for days, is that it provides a great opportunity for entrepreneurs to offer (and implement) fixes. Not surprisingly, power pioneer Elon Musk did just that earlier this month when a Tesla subsidiary – Gambit Energy Storage LLC – was revealed to be secretively building a more than 100 megawatt energy storage project in Angleton, Texas, a town roughly 40 miles south of Houston (a battery that size could power about 20,000 homes on a hot summer day).

Buffett’s Berkshire Hathaway has proposed an multi-billion plan to help Texas avoid a repeat of February’s blackouts: according to the proposal, the company to be known as Texas Emergency Power Reserve, would invest $8.3 billion to build many new gas-powered plants along with gas storage. That would add about 10,000 megawatts of reliability plants to ERCOT, the grid that sends electricity to about 90% of Texans.

According to the Dallas Morning News and Bloomberg, the conglomerate put together a presentation asking state lawmakers to approve a plan for a new company that would add about 10 gigawatts of gas plants and emergency gas storage.

“We really want to make sure that this never happens again. So we’re really wanting to partner with the state,” Chris Brown, chief executive officer of Berkshire Hathaway Energy Infrastructure Group, said in an interview, although what he really wanted is something else entirely as readers will find out shortly. “The proposal is simple: state residents should have a reliable source of backup power” he said, echoing Elon Musk’s own vision of how to “fix” the dilapidated Texas power grid.

Ironically, if Berkshire is successful in its lobbying campaign, Texas would be adding a massive amount of new gas-fired capacity at a time when President Joe Biden is trying to shift the country away from fossil fuels, and in a state that’s invested heavily in wind and solar power (although was remind readers that it was precisely Texas’ outsized reliance on wind power which prompted the collapse, as the cascading failures started once windmills failed due to the freezing temperatures). 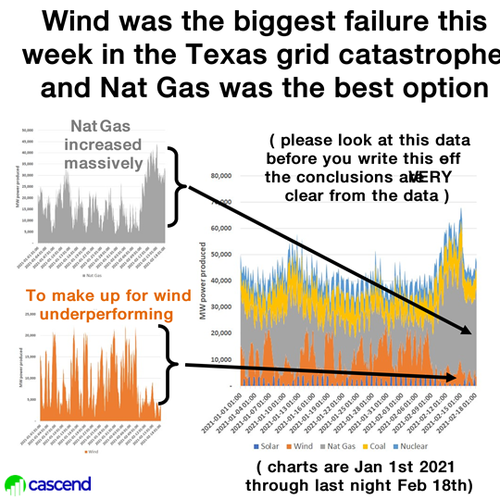 And while superficially the proposal makes sense, with Berkshire proposing that the Texas grid operator retain control the plants and tap them to prevent blackouts like the one that left more than 4 million homes and businesses in the dark, there is one catch… or rather a few catches.

While Buffett would make a one time investment of $8.3BN, Berkshire would earn a whopping 9.3% risk free rate of return – unheard of in a day and age when there are $14 trillion in bonds trading with negative yields – which would be paid by consumers after approval from the Public Utility Commission. The Buffett proposal would also stick Texas power customers with paying the fee to cover the costs of the plants.

Additionally, the plan includes a major change to Texas’ deregulated power market, including guaranteed payments for the extra capacity.

In other words, Buffett is generously “offering” Texas taxpayers a deal where he makes a one-time payment and collects a return that is 6 times higher than 10Y Treasurys despite having roughly the same level of risk. In fact, under Buffett’s proposal he would make his entire investment back in about 10 years. And while billionaire is laughing all the way to the bank, it is Texas taxpayers who end up footing the bill for any future costs which as February demonstrated, will be substantial.

A spokesman for Texas House Speaker Dade Phelan confirmed to Bloomberg that the office had received the slides and had met with Berkshire regarding the plan. However, as CreditSights utility analyst Andy DeVries writes, “we see little to no chance of Texas approving that Buffett proposal,” for one simple reason: “If they were going to spend that amount of money – which is a big if – they would do it with Texas companies.”

Berkshire, however, is undaunted, and believes it could have its plan operational by the winter of 2023, according to the slides. The proposal would cost less than winterizing the state’s power generators or creating a so-called capacity market where generation units are paid to provide supplies in future years, according to Berkshire.

The additional capacity created by Berkshire would ensure that no customer would be without power for more than three hours, the company said. The Texas Reliability Corp. would offer a $4 billion performance guaranty provided by an investment graded counterparty.

The other catch: Buffett’s proposal flies against the very principles that makes the Texas energy market unique. The proposal will face loud opposition, especially from heavy industrial users of electricity who want to pay for power they use, not power pledged for emergencies, which is precisely what Berkshire – which has perfected the insurance model – is hoping to implement. Texas generators also would want to get in on the action, and one observer called the Berkshire proposal “a one-company capacity market.”

It’s why Height Securities analyst Josh Price said he was “skeptical” that the idea would have traction with lawmakers.

“The key question will be whether policymakers are willing to forego market-based principles if a non-competitive approach would be more cost-effective,” he said in an email.

Non-competitive being the key word here, and applies perfectly to Buffett, 90, who is hoping to extend his folksy crony capitalist ways to yet another state. We can only hope that Texans are smart enough to read between the lines.

But the biggest reason why the Berkshire proposal won’t work is that competitors would love to be part of the proposed solution, too. And while generators have proposed a capacity market for Texas in recent years, lawmakers have passed on those bills. They will do the same again, unless somehow their palms end up being well-greased just before the decision is made.

“Something Will Rebalance”: Goldman Boss Solomon Warns That Market Greed Is Outpacing Fear

A child chooses a new skin color in the technocratic paradise