Lumber prices have hit $1,000 per thousand board feet, an all-time high in recent weeks, and could extend gains this year as homebuilding and renovation demand outstrips production. Soaring lumber prices have greatly added to construction costs over the last year and could stifle the number of planned residential construction projects across the US.

“Production is going to have a hard time keeping up with demand growth as the world economy bounces back from Covid-19 in 2021-22,” Paul Jannke, Forest Economic Advisors LLC.’s principal of lumber, said during a conference this week who Bloomberg quoted. He believes average lumber prices will remain elevated. 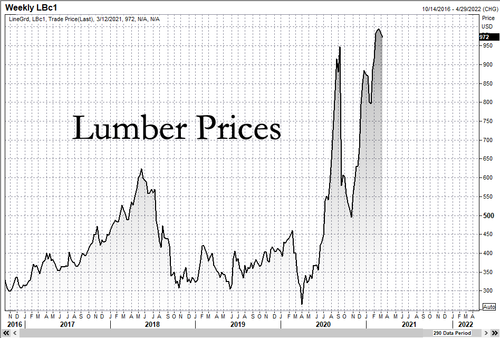 Now the question readers have is how much are these rising costs adding to the construction build? Well, the National Association of Home Builders (NAHB) said rising lumber prices had added $24.4k of costs to the build in the past ten months.

Weeks ago, the Associated General Contractors of America (AGC) penned a letter to the White House requesting the Biden administration to intervene.

“AGC believes the White House can play a constructive role in mitigating this growing threat to multifamily housing and other construction sectors by urging domestic lumber producers to ramp up production to ease growing shortages and making it a priority to work with Canada on a new softwood lumber agreement,” the AGC wrote in a letter.

NAHB has also been vocal and requested the federal government to intervene and lower lumber prices. They asked the Biden administration to end tariffs on Canadian lumber shipments to alleviate supply shortages.

“Lumber price spikes are not only sidelining buyers during a period of high demand, they are causing many sales to fall through and forcing builders to put projects on hold at a time when home inventories are already at a record low,” NAHB said in a statement.

Additionally, as we noted during last year’s chaotic surge, it’s not all demand-driven as one builder noted, “the explanation they had for us was that COVID-19 shut down the plants that treat the wood, and that finally caught up.”

“The supply chain was screwed up,” said Wilson, Wilson Construction’s owner in Galveston. “Dimension sizes were in limited supplies; even something as simple as a two-by-four-by-twelve Southern yellow pine treated was in extremely short supply.”

But don’t worry future homeowners and or contractors, Powell says The Fed has “the tools” to manage inflation… well, he is right about one thing! (they do have some tools) but don’t own any sawmills nor have the ability to print wood out of thin air.

We paid $30k for the lumber package in January to build this house. Same lumber pack today is $62k. In October it was $18k… 👀😳🤑🤦🏾‍♂️🤷🏾‍♂️#Inflation pic.twitter.com/iFGJHklr2d

I’m Hoping For An “Enormous” Infrastructure Package, Says Joe Manchin; And Maybe A VAT Will Pay For It