A tweet posted by Burger King which said “women belong in the kitchen” that was meant to be a woke virtue signal to mark International Women’s Day backfired horrendously. 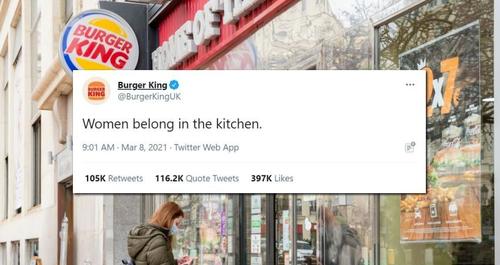 The fast food giant followed up the tweet with a second that read:

“If they want to, of course. Yet only 20% of chefs are women. We’re on a mission to change the gender ratio in the restaurant industry by empowering female employees with the opportunity to pursue a culinary career.”

However, the fact that the explanatory text was not included in the first tweet just made it look to many as though Burger King was regurgitating a sexist trope.

[ZH: We note that both tweets have since been deleted] 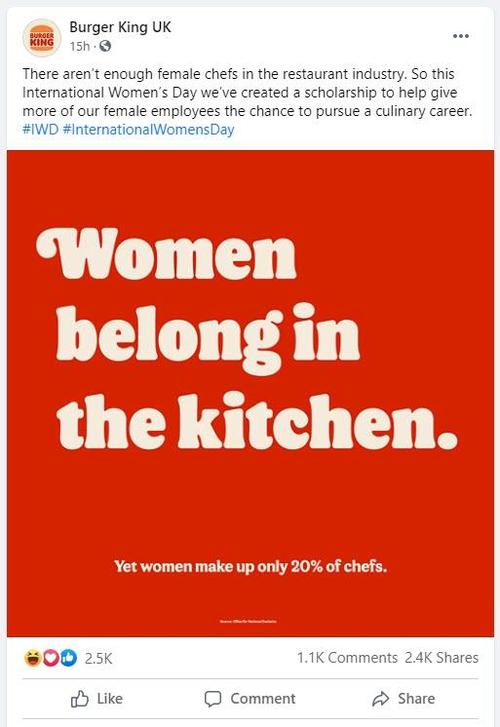 Perhaps forgetting that the woke mob displays ruthless intolerance to humor or nuance, the company faced an immediate backlash before ‘Burger Queen’ began trending, with Twitter users demanding a name change as an apology for causing offense.

Others called for a boycott, including this woman whose tweet received over 22,000 likes.

I won’t be eating at your store again thanks

“Burger King belongs in a trashcan,” said another verified liberal.

Burger King belongs in a trashcan.

Others pointed out the irony of women in the kitchen only being acceptable in 2021 if those women are wage slaves for giant transnational corporations, with traditional family gender roles frowned upon.

“If they want to, of course.” No one on earth would be working in a Burger King kitchen if they didn’t have to pay rent & bills, but Burger King is trying to make it sound like female empowerment lmao pic.twitter.com/56q58dVKIR

The Quant Rebalance Arrives: Kolanovic Says Now Is The Time To Buy Energy