What do you get when you combine potent fiscal and monetary stimulus with a U.S. economy on the cusp of a rebound amid surging oil prices? The answer: fears that medium-term inflation relative to the longer term running at the fastest clip since nearly the turn of the century.

The spread between U.S. five- and 10-year inflation breakevens is now the most positive it’s ever been in Bloomberg data going back to the start of 2002. The differential, which may be thought of as the market’s evolution of inflation over the medium term versus the longer term, went briefly above zero following the financial crisis as well, but wasn’t so pronounced. 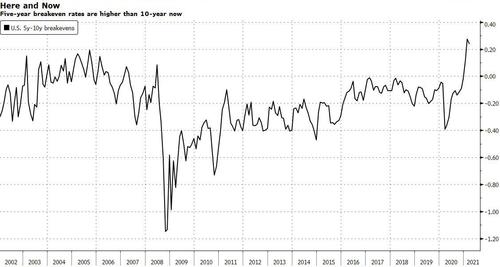 The differential is a sign of the market’s collective thinking that the $1.9-trillion fiscal relief ready for endorsement by the House will stoke price pressures over the medium term without necessarily impinging on the evolution of inflation over the longer term. In other words, secular inflation may still be elusive, which is another reason why the Fed may decide to look past price pressures in the here and now (and witness how prescient last year’s virtual Jackson Hole conference seems in hindsight in the context of average inflation targeting, though I would call it serendipity).

The surge in non-farm payrolls for February and the progress on vaccination show a strong economic rebound may be on the cards. As if on cue, Brent crude prices are hovering around $70 a barrel. All these mean that the breakeven spread is likely to stay elevated for now.